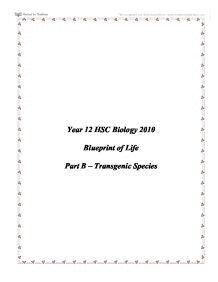 HSC Biology. Contract a flowchart that outlines the general process for creating a transgenic species.

Year 12 HSC Biology 2010 Blueprint of Life Part B - Transgenic Species i.) Contract a flowchart that outlines the general process for creating a transgenic species. ii.) 1.) Indentify the gene which is transferred from another species into the cotton plant. From where does it get its name? The gene is Bacillus thuringiensis(Bt), Japanese biologist, Shigetane Ishiwatari was investigating the cause of the sotto disease that was killing large populations of silkworms when he first isolated the bacterium Bacillus thuringiensis (Bt) as the cause of the disease in 1901. Ernst Berliner isolated a bacteria that had killed a Mediterranean flour moth in 1911, and rediscovered Bt. He named it Bacillus thuringiensis, after the German town Thuringia where the moth was found. 2.) State the reason why it is beneficial to transfer this gene to cotton plants. ...read more.

Most commercial B. thuringiensis products contain the protein toxin and spores, but some contain only the toxin component. When B. thuringiensis is ingested by a caterpillar, the protein toxin is activated by alkaline conditions and enzyme activity in the insect's gut. If the activated toxin attaches to specific receptor sites, it paralyzes and destroys the cells of the gut wall, allowing the gut contents to enter the insect's body cavity. Poisoned insects may die quickly from the activity of the toxin or may stop feeding and die within 2 or 3 days from the effects of septicemia (blood-poisoning). iii.) Debate on Transgenic species - Extended response. Transgenic species are used to speed up the introduction of existing characters into a strain/breed for improvement and modification and/or developing animals specially created for use in xenografting, i.e. ...read more.

3. Some people feel that animals should be regarded as equal to humans in that they have the same basic rights as human beings. However, in most societies animals are relegated to a position several steps below that of man. 4. An argument attempts to focus on integrity of species in that each biological species has a right to exist as a separate identifiable entity. But biologists do not regard a species as a fixed, water-tight entity; rather they are regarded as dynamic, constantly evolving groups. 5. Finally, the introduction of human genes into animals, and vice versa, may be seen by many as clouding the definition of "humanness". But most of the known human genes are not unique, and comparable genes do occur in animals. In addition, many retroviruses have integrated into the human genome without any recognizable devaluation of our humanness. Reference Book Rhonda Caddy and Jane West, 2003, Macquarie Revision Guides, Macmillan Education, Australia Websites Mettler Toledo, United States Patent 6063629, US, viewed 18 May 2010, http://www.freepatentsonline.com/6063629.html ...read more.