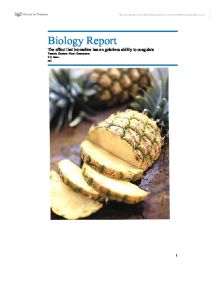 Biology Report The effect that bromeline has on gelatines ability to coagulate Yasmin Kazemi Ahari Rasmussen 2.U Journal Investigating enzymes Aim: The aim of the experiment was to investigate the effect of the enzyme bromeline on gelatins ability to form a mass, and how temperature also can have an affect on this particular process. Hypothesis: It is expected that when the bromeline enzyme isn't present, that the gelatin will remain staying as gel, when dissolved in water. The untreated raw juice, would be the only result where the process would make it break down the proteins in the gelatin. ...read more.