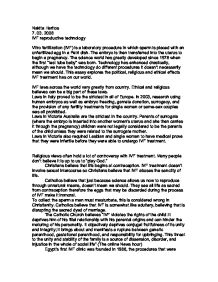 Nakita Haritos 7. 03. 2008 IVF reproductive technology Vitro fertilization (IVF) is a laboratory procedure in which sperm is placed with an unfertilized egg in a Petri dish. The embryo is then transferred into the uterus to begin a pregnancy. The science world has greatly developed since 1978 when the first "test tube baby" was born. Technology has enhanced drastically, although we have the technology do different procedures it doesn't necessarily mean we should. This essay explores the political, religious and ethical effects IVF treatment has on our world. IVF laws across the world vary greatly from country. Ethical and religious believes can be a big part of these laws. Laws in Italy proved to be the strictest in all of Europe. In 2003, research using human embryos as well as embryo freezing, gamete donation, surrogacy, and the provision of any fertility treatments for single women or same-sex couples was all prohibited. Laws in Victoria Australia are the strictest in the country. ...read more.

The Catholic Church believes "IVF violates the rights of the child: it deprives him of his filial relationship with his parental origins and can hinder the maturing of his personality. It objectively deprives conjugal fruitfulness of its unity and integrity; it brings about and manifests a rupture between genetic parenthood, gestational parenthood, and responsibility for upbringing. This threat to the unity and stability of the family is a source of dissension, disorder, and injustice in the whole of social life" (The online News hour) Egypt's first IVF clinic was founded in 1986, the procedures that were permitted to be preformed were fairly restricted. According to Fatwas (rule the reproductive lives of Shiite and Sunni Muslim couples) "IVF was OK to do as long as you were using gametes from husband and wife and the embryos were transferred back to the same wife." Anything outside of using sperm or egg from an infertile couple, like surrogacy or sperm donation, is strictly forbidden in Islam. ...read more.

However people need to relies that every day thousands of people are dying due to poverty and war. These people have already developed personalities and relationships. They already have people that love them. That is the difference between them and the embryos. The Embryos haven't developed at all. At the time of disposal, all that they have experienced is sitting in a Petri dish. There are so many hard ships in life. I believe that if we have the technology to do well and to improve the lives of people we should. IVF treatment improves the lives of people hoping for a family. Family is the most important thing in life. * Roman Espejo. "Introduction." At Issue: Human Embryo Experimentation. Ed. Roman Espejo. San Diego: Greenhaven Press, 2002. August 2004. 4 March 2008. <http://www.enotes.com/human-embryo-article/39590>. * "Embryonic Stem cell development raises ethical concerns." The online News hour 24 Aug 2006 4 Mar 2008 <http://www.pbs.org/newshour/bb/health/july-dec06/stemcells_08-24.html>. * Shea, John. "The Moral Status Of In Vitro Fertilization." Free Republic Jan 2003 2 Mar 2008 <http://www.freerepublic.com/focus/f-religion/1683157/posts>. * Hoare, Daniel. "Lesbian community welcomes Vic IVF changes." Health and nursing issues Australia 15 Dec 2007 24 Feb 2008 <http://agedcareact.wordpress.com/2007/12/15/bic-government-changes-ivf-laws/>. ...read more.