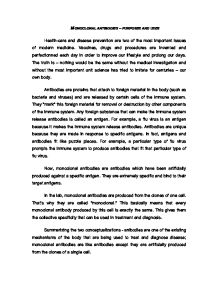 MONOCLONAL ANTIBODIES - PURPOSES AND USES Health-care and disease prevention are two of the most important issues of modern medicine. Vaccines, drugs and procedures are invented and perfectionned each day in order to improve our lifestyle and prolong our days. The truth is - nothing would be the same without the medical investigation and without the most important unit science has tried to imitate for centuries - our own body. Antibodies are proteins that attach to foreign material in the body (such as bacteria and viruses) and are released by certain cells of the immune system. They "mark" this foreign material for removal or destruction by other components of the immune system. Any foreign substance that can make the immune system release antibodies is called an antigen. For example, a flu virus is an antigen because it makes the immune system release antibodies. Antibodies are unique because they are made in response to specific antigens. In fact, antigens and antibodies fit like puzzle pieces. For example, a particular type of flu virus prompts the immune system to produce antibodies that fit that particular type of flu virus. ...read more.

A hybridoma will produce the monoclonal antibody that was originally produced by the B-Lymphocyte cell. The kind of antibody the original B-Lymphocyte cell produces depends on the kind of antigen that was injected into the mouse before the B-Lymphocyte cells were harvested. For example, if the mouse was injected with a flu virus, the mouse will have B-Lymphocytes that produce flu antibodies. When fused with a tumour cell to make a hybridoma, the hybridoma will produce monoclonal antibodies against the flu. After the hybridoma cells are created and chosen for effectiveness in the lab, they are put into media that can help them grow and subsequently produce the monoclonal antibodies. There are two ways of doing this: * in vitro: that is, in culture vessels. The yield runs from 10-60 �g/ml. * in vivo: growing in mice. Here the antibody concentration in the serum and other body fluids can reach 1-10 mg/ml. This product of cell fusion combined the desired qualities of the two different types of cells: the ability to grow continually, and the ability to produce large amounts of pure antibody. ...read more.

In diagnosis, radioactive markers are attached to them to locate a certain kind of cell within the body. They are used in diagnostic imaging of internal organs and tumours. Because selected hybrid cells produce only one specific antibody, they are more pure than the polyclonal antibodies produced by conventional techniques. They are potentially more effective than conventional drugs in fighting disease, since drugs attack not only the foreign substance but the body's own cells as well, sometimes producing undesirable side effects such as nausea and allergic reactions. Monoclonal antibodies attack the target molecule and only the target molecule, with no or greatly diminished side effects. What can we conclude from all this? That humans try too hard to perform actions only Mother Nature can do; that we're missing the main points of a ridiculous research. Or are we supporting our own existence by externally overproducing something our own bodies already have - an immune system? Monoclonal antibodies have brilliant purposes and, if correctly produced, their appliance in modern medicine can revolutionize the treatment of an endless number of deathly diseases. It is only a matter of time for science to develop a more perfect model of our "true selves" and use it to cure Nature's unsuccessful "DEMO version". ...read more.