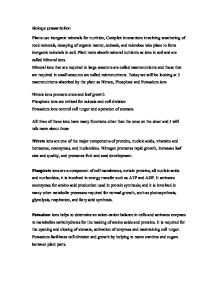 Biology presentation Plants use inorganic minerals for nutrition, Complex interactions involving weathering of rock minerals, decaying of organic matter, animals, and microbes take place to form inorganic minerals in soil. Plant roots absorb mineral nutrients as ions in soil and are called Mineral ions. Mineral ions that are required in large amounts are called macronutrients and those that are required in small amounts are called micronutrients. Today we will be looking at 3 macronutrients absorbed by the plant as Nitrate, Phosphate and Potassium ions Nitrate ions promote stem and leaf growth Phosphate ions are critical for mitosis and cell division Potassium ions control cell turgor and operation of stomata All three of these ions have many functions other than the ones on the sheet and I will talk more about those Nitrate ions are one of the major components of proteins, nucleic acids, vitamins and hormones, coenzymes, and nucleotides. ...read more.

20. In this question, I will be talking about the movement of the mineral ions through the soil to the roots. Plant roots are able to absorb minerals somewhat selectively, enabling the plant to accumulate essential elements that may be present in the soil in very little quantities. In most plants, the roots absorb mineral ions when it is dissolved in water to form a solute. There are 3 different methods and those are: Diffusion, Mass flow and via fungal hyphae Diffusion is movement of ions within water films that exist around soil particles, it is the driving force being the ion concentration gradient, always moving from an area of high concentration to an area of lower concentration. Most ions in solution are moved by diffusion, the movement occurring in very short distances around and between the soil particles. Mass flow takes place when water flows through the soil. ...read more.