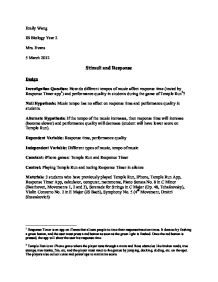 Stimuli and Response. Investigation Question: How do different tempos of music affect response time (tested by Response Timer app[1]) and performance quality in students during the game of Temple Run[

This will arouse the nervous system and make the body more aware and stressed, and the stress response could halt productivity and bring anxiety which could slow response time and decrease productivity. The slower-beat music brought a "relaxing and renewing" feeling to my test subjects, and it brought the parasympathetic nervous system, which brought the body to rest, reducing stress, tenseness and anxiety. They were able to be more focused on their response times, so they had quicker response times during the slower pieces, and their scores in Temple Run were higher because they were relaxed and stress free; this made it easier for them to focus on the game. My data fit very well with my hypothesis. The songs were listed in order of increasing tempo, and for the correlation between tempo and response time, there were some inconsistencies in the middle, but it was a general upward trend, showing that as the tempo increased, the response time was longer, and there was a direct correlation between those two variables. The graph Tempo vs. Response Time shows some inconsistencies to my hypothesis in the middle, but it is a general upward trend. These inconsistencies made me wonder if the medium tempo-ed songs were a nice medium between the two. They were just fast enough to stimulate the system, but not enough to bring out the anxious sympathetic nervous system. I did a Pearson's Correlation Test between Tempo and Response time, and for each of the three trials, I got a positive number greater than .5. ...read more.

If I were testing performance quality next time, I would get a more uniform game that gives a fair opportunity to my test subjects instead of give them different unexpected scenarios and opportunities in an arcade-style game. Temple Run is also a game that requires high focus, and it is not a universal representation of test for performance quality. Some of my test subjects drank caffeine beforehand, so the next time, I will properly inform my test subjects to not take caffeinated items and eliminate intakes that are major influences/stimuli/depressants to the nervous system. My test subjects also had some inherent stress and weariness from homework (final extended essays due at midnight), sports etc, and the inherent stress or weariness is almost impossible to eliminate as a factor influencing the outcome of the data, but the next time, I would record their stress and do the experiment when they have lower levels of stress, so the music could influence their central nervous system more. 1 Response Timer is an app on iTunes that allows people to time their response/reaction times. It does so by flashing a green button, and the user must press a red button as soon as the green light is flashed. Once the red button is pressed, the app will show the user his response time. 2 Temple Run is an iPhone game where the player runs through a maze and faces obstacles like broken roads, tree stumps, tree trunks, fire, etc, and the player must react to the games by jumping, ducking, sliding, etc. on the spot. The players also collect coins and power ups to maximize score. ...read more.