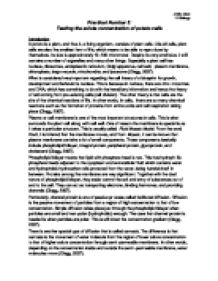 Practical Number 3: Testing the solute concentration of potato cells Introduction A potato is a plant, and thus it, a living organism, consists of plant cells. Like all cells, plant cells are also the smallest form of life, which means to be able to reproduce by themselves. Its size is approximately 10-100 micrometer. Despite its very small size, it still contains a number of organelles and many other things. Especially a plant cell has nucleus, ribosomes, endoplasmic reticulum, Golgi apparatus, cell wall, plasam membrane, chloroplasts, large vacuole, mitochondria, and lysosome (Clegg, 2007). What is considered very important regarding the cell theory of a blueprint for growth, development and behavior is nucleus. This is because in nucleus, there are chromosomes and DNA, which has something to do with the hereditary information and hence the theory of cell coming from pre-existing cells (cell division). The other theory is that cells are the site of the chemical reactions of life. In other words, In cells, there are so many chemical reactions such as the formation of proteins from amino acids and cell respiration taking place (Clegg, 2007). Plasma or cell membrane is one of the most important structures in cells. This is what surrounds the plant cell along with cell wall. One of reason the membrane is special is as it takes a particular structure. This is usually called Fluid Mosaic Model. From the word Fluid, it is inferred that the membrane moves, and from Mosaic, it can be known that plasma membrane contains a lot of small components. Those components basically include phospholipid bilayer, integral protein, peripheral protein, glycoprotein, and cholesterol (Clegg, 2007). ...read more.

based on � half of the place value of the last measured value, provided there is limit for the precision at both ends of the ruler. Table 2: processed data with mean and standard deviation for the difference in length of the potato in different sucrose solution concentrations during 25 minutes Sample calculation -Mean all the values Mean = --------------------- the number of the values (0.1 + 0.5 + 0.0 + 0.5 + 0.2) = ------------------------ 5 = 0.3 Table 3: processed data for the difference in length of potato from the initial one in percentage (%) Observations (Qualitative data) Above all, before potatoes are actually put into the test tubes, those which were left outside for a long time went through some brownish color change. Secondly, almost as soon as the cylinders of potato pieces were put into the test tubes, first three potatoes in 0.0, 0.2, and 0.4 M of sucrose solutions sank to the bottom and the rest of three potato pieces in 0.6, 0.8, and 1.0 M of that solutions floated. Besides, visually it was seen that the potatoes shrunk and inflated in width and length. In the first three test tubes, potatoes got longer and bigger while in the last three ones, those became shorter and thiner. Finally, when they were taken out, potatoes that had been in 0.0, 0.2, and 0.4 M of sucrose solutions were weaker and thus bended more unlike those from 0.6, 0.8, and 1.0 M of sucrose solutions. Graph 1: the difference in the length of potato in different sucrose solutions from the initial length in percentage (%) ...read more.

The longer the set up is left, the better the result and the easier and clearer the comparison and difference would be. Yet, it is still fine since nevertheless the result is clear and easy to compare. What improves this experiment is following. For better or improved reading on measurement and reduced uncertainties, a pipette can be useful. It seems good to see if the height and hence the amount of sucrose solutions in test tubes is kept equal to each other by dropping one or two drops. For maintaing the same time for potatoes to be put, reacted, and taken out, it can be an idea to get help from other persons. Another solution is to divide six test tubes to three sets so that one person can manage all starting stopwatch, closing corks, and putting pieces. What should be careful here is to keep the time same for every time. To avoid the third error is easy but just time consuming. The solution is to use separate 100 mL measuring cylinder every time when pouring different concentrations of sucrose solution. Though the solution is simple, the effect would be great, allowing more exact changes in length. In terms of browning of potatoes, it can be solved if potato is cut when everything is set up and what is left is to put potatoes as cutting them in advance was the problem. Yet, time to make sure the same mass and length is inevitable. Finally for better reaction to occur, time should be longer as said before. Though taking a lot of equipments, it can be considered to set up at least three trials simultaneously. It can save time of waiting and allow more than five trials. ...read more.