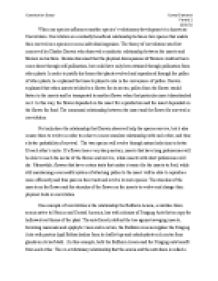 ﻿Coevolution Essay Corey Diamond Period 1 12/6/11 When one species influences another species? evolutionary development it is known as Coevolution. Coevolution is a mutually beneficial relationship between two species that enable their survival as a species or as an individual organism. The theory of coevolution was first conceived by Charles Darwin who observed a symbiotic relationship between the insects and flowers on his farm. Darwin discerned that the physical discrepancies of flowers could not have come about through self-pollination, but could have only been attained through pollination from other plants. In order to justify his theory that plants evolved and reproduced through the pollen of other plants, he explained that insects played a role in the conveyance of pollen. Darwin explained that when insects trekked to a flower for its nectar, pollen from the flower would fasten to the insects and be transported to another flower when that particular insect disembarked on it. In this way, the flower depended on the insect for reproduction and the insect depended on the flower for food. ...read more.

The ants fiercely defend the tree against ravaging insects, browsing mammals and epiphytic vines and in return, the Bullhorn Acacia supplies the Stinging Ants with protein-lipid Beltian bodies from its leaflet tips and carbohydrate-rich nectar from glands on its leaf stalk. (In this example, both the Bullhorn Acacia and the Stinging ants benefit from each other. The co-evolutionary relationship that the acacia and the ants share is called a mutual relationship where both species benefit.) Here it can be seen that the Bullhorn Acacia has evolved in a way that supplies the Stinging Ants with food. It can be assumed that Bullhorn Acacias that could produce protein-lipid Beltian and nectar more efficiently were more capable at surviving because of the Ants that occupied the Acacia for the protein and nectar. At the same time, the Stinging Ants can survive because of the sustenance they attain from the Acacia. Another example of coevolution can be seen in the relationship between the Australian Hammer Orchid and the Thynnid Wasp in Australia. ...read more.

In the process, the wasp transfers pollen from flower to flower. (In this example, the relationship is only beneficial to the Orchid, while wasp receives no benefits. This type of co-evolutionary relationship is called a commensal relationship where one organism benefits but the other does not). It can be seen that the Hammer Orchid evolved in a way in which it took advantage of the mating rituals of the Thynnid Wasps and thus was capable of surviving. In conclusion, the relationship between two species of organisms can have a drastic impact on the way they develop and spread. The symbiotic relationship that two organisms share change and alter them in a way that helps them survive and flourish. Those organisms that do not possess the necessary traits that help them survive die out while the ones with the beneficial traits survive. At the same time, the organisms that survive influence and stimulate the change of the organisms that depend on them and, in turn, influence the evolution of the dependent organism. Coevolution can be beneficial to both parties of organisms or beneficial to only one party of organism. However, the influence that the organisms share with each other indirectly changes stimulates the evolution of the species. ...read more.