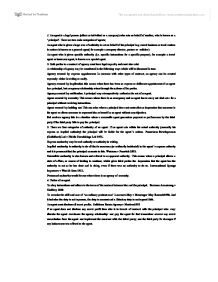 1. An agent is a legal person (either an individual or a company) who acts on behalf of another, who is known as a ' principal'. There are two main categories of agents; An agent who is given a large area of authority to act on behalf of the principal in general business or trade matters is matters is known as a general agent( for example a company director, partner or solicitor) An agent who is given specific authority (i.e. specific instructions for a specific purpose), for example a travel agent or insurance agent, is known as a special agent. 2. Both parties to a contract of agency must have legal capacity and must also exist. A relationship of agency may be constituted in the following ways which will be discussed in turn: Agency created by express appointment In common with other types of contract, an agency can be created expressly- either in writing or orally. ...read more.

Agent created by holding out This can arise where a principal does not contradict an impression that someone is his agent or allows someone to represent him or herself as an agent without any objection. Del credere agency this is a situation where a mercantile agent guarantees payment or performance by the third party if the third party fails to pay the principal. 3. There are four categories of authority of an agent: If an agent acts within his actual authority (normally his express or implied authority) the principal will be liable for the agent's actions. Panorama Developments (Guildford) Ltd v Fidelis Furnishings Ltd 1971. Express authority may be oral authority or authority in writing. Implied authority is authority to do all that is necessary (or ordinarily incidental) ...read more.

Presumed authority would be one where there is an agency of necessity. 4. Duties of an agent To obey instructions and adhere to the terms of the contract between him and the principal. Bertram Armstrong v Godfrey 1830 To exercise the skill and care of 'an ordinary prudent man' Luxmore-May v Messenger May Bostock1990. And it includes the duty to act in person, the duty to account and a fiduciary duty to act in good faith. An agent must disclose all secret profits. Solicitors Estate Agency v Maclver1992 if an agent does not disclose any secret profit then s/he is in breach of contract with the principal who may: dismiss the agent: terminate the agency relationship: not pay the agent for that transaction: recover any secret commission from the agent: not implement the contract with the third party; sue the third party for damages if any inducement was offered to the agent. ?? ?? ?? ?? ...read more.