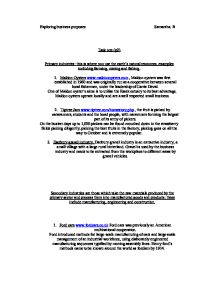 Exploring business purposes Samantha. B Task one (p2) Primary industries: this is where you use the earth's natural resources, examples including farming, mining and fishing. 1. Maldon Oysters www.maldonoysters.com , Maldon oysters was first established in 1960 and was originally run as a cooperative between several local fishermen, under the leadership of Carrie Deval. One of Maldon oyster's aims is to utilise the Essex estuary to its best advantage. Maldon oysters operate locally and are a well respected small business. 2. Tiptree Jam www.tiptree.com/homestory.php , the fruit is picked by caravanners, students and the local people, with caravnners forming the largest part of its army of pickers. On the busiest days up to 1,000 pickers can be found crouched down in the strawberry fields picking diligently, picking the best fruits in the factory, picking goes on all the way to October and is extremely popular. 3. Danbury gravel industry, Danbury gravel industry is an extractive industry, a small village with a large rural hinterland. ...read more.

The idea was immediately successful but it was only in 1949 that the Britvic brand name was formally launched into the market place. In the years following the Second World War, Britvic went from strength to strength building a modern factory in its hometown of Chelmsford. In 1971 the British vitamin product company formally changed its name to Britvic in recognition of its leading brand's appeal. In 1986 Canada dry Rawlings, a company formed by the merger of the bass (now IHG) and Whitbread's soft drinks interests came together with Britvic to form Britvic soft drinks. Tertiary industry, the tertiary industry is generally referred to as services, this sector economic activity includes everything from retail and wholesale transportation. 1. River island www.riverisland.co.uk , River Island is a male and female clothes wear chain with 197 stores located across the United kingdom, Republic of Ireland, Malta, Cyprus, Poland, Turkey, America and the middle east with the name being a leader for casual fashion. It began in 1948 by Mr Bernard Lewis (see below) in a small store in London branded Lewis separates. ...read more.

3. JJB sports www.jjbsports.co.uk , the sports shop chain was founded in 1971, when ex footballer Dave Whelan acquired a single sports shop in Wigan. It sells all sorts of sport wear and sports equipment, it is a shop and a internet based company and is popular all around the world. What is happening to industries? Primary sector The primary sector industry mostly involves using natural resources into primary products. Most products produced in this sector are raw materials but for other industries. The main businesses used in this sector are agriculture, fishing, forestry and mining. Over the past 100 years of the primary sector has been declined due to the use of technology improving. Secondary industry Worldwide sector has decreased in the UK over the 20th century; it shows that technology plays a very important part in people's lives today. Other countries exporting the goods mean that it is good for the economic growth in the UK. Tertiary industry The tertiary sector has been improved over the years due to technology, however we are in a current recession and the sales in the tertiary sector have suffered immensely. ...read more.