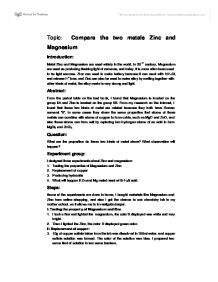 Topic: Compare the two metals Zinc and Magnesium Introduction: Metal Zinc and Magnesium are used widely in the world, in 20th century, Magnesium are used as producing flashing light of cameras, and today, it is more often been used to be light sources. Zinc can used to make battery because it can react with NH4Cl, and release H+ ions, and Zinc can also be used to make alloy by melting together with other kinds of metal, the alloy made is very strong and light. Abstract: From the period table on the test book, I found that Magnesium is located on the group IIA and Zinc is located on the group IIB. From my research on the Internet, I found that these two kinds of metal are related because they both have Roman numeral "II". In some cases they share the same properties that atoms of these metals can combine with atoms of oxygen to form oxide, ...read more.

II: Replacement of copper: 3. 10g of copper sulfate taken from the lab was dissolved in 100ml water, and copper sulfate solution was formed. The color of the solution was blue. I prepared two same kind of solution in two same beakers. 4. Zinc and Magnesium were put in two beakers, after a while, I found that copper ions which dissolved in water were forced out by Zinc and Magnesium and formed copper metal, the blue color in beaker were weakened and after a few minutes, it vanished. III: Producing the hydroxide: 5. First, I prepared Magnesium sulfate solution, then 5g hydroxide solution was added into the solution. After a while, the white Mg(OH)2 solid was formed. 6. I did the same steps shown above again but NaOH was replaced by ZnCl2, and Zn(OH)2 was formed. 7. ...read more.

I put the product into water, then I used PH test paper, the paper displayed red color. Zinc: Burning with green color with a little bit blue, and I found that the product ZnO displayed yellow color when it was in a high temperature, and it became white when it became cooler. II: Replacement of copper: First, the CuSO4 solution displayed blue color. Then, magnesium and zinc was placed into CuSO4 solution, there is red(a little bit purple)solid appeared, and the blue color of the solution in the test tube became weaker and after a while, it disappeared. III: Producing the hydroxide In the first step, the Mg(OH)2 was formed, the observation was the appearance of white precipitation. Also in the second step, the Zn(OH)2 was formed, there was appearance of white precipitation. In the third step and the forth step, the observation was same. IV: Reaction between metals and acid Bubbles appeared in the second test tubes. White precipitation appeared in the test tube after heating for a while. ?? ?? ?? ?? ...read more.