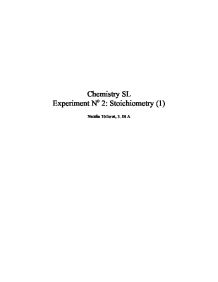 Mass of CuSO4 (g) Molar mass of CuSO4 (g/mol) Mass in moles of CuSO4 (mol) 2.4 18.02 0.13 4.3 159.61 0.027 For CuSO4. x3H2O = 4.8 Average = 4.7 Conclusion: The aim, to determine the coefficient of water in the formula for copper sulphate hydrate, was achieved. To get a more true result the experiment was repeated three times and an average was calculated. This average amounted to 4.7, which comes very close to the actual coefficient, which is 5. When I look at the result for the 2nd trial and the 3rd trial they are identical (however the 1st is not). This proves that we were quite precise if not that accurate. Evaluation: Though the experiment was very straightforward, errors have been made and there was sill space left for improvement. To start off, I would have to say that my preparation for the lab was insufficient. ...read more.

This had a slight effect on the mass. This could easily be avoided if we had taken more care with choosing the equipment and making sure it was fit to be used (cleaning it). The weighing scale used measures to one decimal place which doesn't the result very accurate. The readings were used in the calculations and so according to the rule of significant figures the result were given in two significant figures. Since more than one calculation was done to get the final result, this would cause the results to be less accurate than desired. If possible, a scale measuring to two decimal places would be helpful in being more accurate. The experiment could be improved by performing two more trials, making the total five. Since three repetitions is the minimum for subsequent average calculations, this would only help to make the experiment more factual. But then again this would require more time, which we did not have at the time. ...read more.