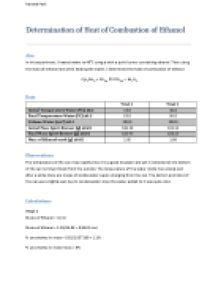 Determination of Heat of Combustion of Ethanol

2. Another cause for this error was the flame. The size of the flame changed slightly and the flame moved about a lot due to air movement. Even though I tried to keep the bottom of the can just touching the tip of the flame, it was not possible. Also there was a large amount of energy lost directly from the flame to heat the air surrounding it. This was all caused because the experiment was conducted in a lab full of students and with open doors. I could have done the experiment in a closed box or an empty room with closed doors and windows to reduce these errors. 3. I also observed some soot forming at the bottom of the can which was caused due to incomplete combustion of the ethanol. This means that the energy released during incomplete combustion was lower where as in my experiment I assumed there was only complete combustion. 4. Finally the theoretical value I used is for STP which was not the case in my experiment. Due to this fact the calculations used to determine the heat of combustion of ethanol are not accurate. ...read more.