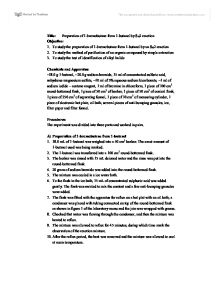 10. After the reflux period, the heat was removed and the mixture was allowed to cool at room temperature. B) Purification of 1-bromobutane by extraction 1. The cool mixture was decanted into a 250-mL separatory funnel. 2. The round-bottomed flask was rinsed with small amount of water and the rinse was put into the separatory funnel. 3. The two layers were allowed to separate and the aqueous later was drained off. 4. The organic later was washed in the separatory funnel successively with 10 mL water, 10 mL of 5 % aqueous sodium bicarbonate and 10 mL of water. 5. The funnel was shaken well in each case. The gas pressure was released regularly during the shaking. 6. The aqueous layer was discarded down the drain. 7. The organic later was collected into a 50 mL conical flask. 8. To the organic later, about 1 gram of anhydrous magnesium sulphate was added. The conical flask was swirled thoroughly. 9. The organic layer was filtered using the filter paper and funnel to remove the used magnesium sulphate. ...read more.

The extractions further isolated the product, the substance which has higher density was always the bottom layer and the lighter was on top. It turned out that the organic layer was always on the bottom of each extraction. Anhydrous magnesium sulphate was a very good drying solution. This allowed it to soak up the remaining water to a great extent. The amount collected was 9.207 gram of 1-bromobutane. The percent yield of 1-bromobutane obtained was 31%. The sodium iodide/acetone classification tests proved positive. This reaction must be a SN2 reaction as the product was almost entirely 1-bromobutane, if by an SN1 mechanism, the product should consist of mostly 2-bromobutane derived from the sec-butyl cation formed via a 1,2-hydride shift. Such an interpretation of the product distribution must be made with caution. The presence of small amounts of 2-bromobutane in the reaction product did not necessarily mean that it was produced from 1-butanol via an SN1 mechanism because an alternative sequence of an E2 elimination of the protonated 1-butanol to give 1-butene followed by HBr addition to the 1-butene would also produce 2-bromobutane. ...read more.