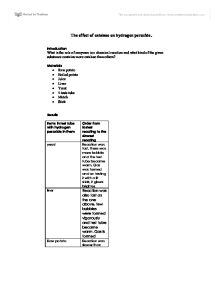 The effect of catalase on hydrogen peroxide

The effect of catalase on hydrogen peroxide. Introduction What is the role of enzymes in a chemical reaction and what kind of the given substance contains more catalase than others? Materials * Raw potato * Boiled potato * Juice * Liver * Yeast * 5 tests tube * Match * Stick Results Items in test tube with hydrogen peroxide in them Order from fastest reacting to the slowest reacting yeast Reaction was fast, there was more bubble and the test tube became warm. Gas was formed and on testing it with a lit stick, it glows brighter. ...read more.

Stick doesn't glow Boiled potato No reaction and no bubbles formed. Stick doesn't glow. Conclusion Fresh living materials have enough catalase present in them. When exposed to hydrogen peroxide bubbles of gas are produce. The gas which was formed in the first three items was oxygen as when it was exposed to a glowing wooden stick it glows brighter. In the yeast and liver test tube more bubbles were formed vigorously because when yeast and liver is added to hydrogen solution, a decomposition reaction occurs, liberating oxygen gas as shown in the reaction below. ...read more.

This was due to absence of catalase in the juice and boiled potato. When the potato was boiled the catalase was denatured that's why it was missing in the potato. Evaluation It was hard to measure the 2cm3 of the H2O2 into the test tube since the measuring cylinder which was given was just calibrated 5 cm3 and 10 cm3. Due to that, a method of estimation was used which might have caused some errors. To develop this experiment I like to used the measuring cylinder which has the actual number to the required measured told. . ?? ?? ?? ?? ...read more.