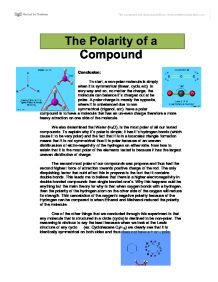 The Polarity of a Compound. We also determined that Water (H2O), is the most polar of all our tested compounds. To explain why it`s polar is simple; it has it`s hydrogen bonds (which cause it to be very polar) and the fact that it is in a isosceles triang

The Polarity of a Compound Conclusion: To start, a non-polar molecule is simply when it is symmetrical (linear, cyclo,etc) in evry way and so, no matter the charge, the molecule can balance it`s charges out at he poles. A polar charge is merely the opposite, where it is unbalanced due to non symmetrical (triganol, etc) have a polar compound is to have a molecule that has an un-even charge therefore a more heavy attraction on one side of the molecule. We also determined that Water (H2O), is the most polar of all our tested compounds. To explain why it`s polar is simple; it has it`s hydrogen bonds (which cause it to be very polar) and the fact that it is in a isosceles triangle formation means that it is not symmetrical thus it is polar because of an uneven distribusuion of elctro-negativity of the hydrogen on either side. Now how to exlain that it is the most polar of the elements tested is because it has the largest uneven distribution of charge. The second most polar of our compounds was propone and thus had the second highest force of attraction towards positive charge of the rod. The only disquishing factor that ould affect this in propone is the fact that it contains double bonds. ...read more.

So, simply put; because maethanol is has smaller gravitational pull et ass than ethanol, it is thus displaced much easier by the polarity of the pole than the latter. Evaluation: To start, our group did most things correctly but merely in a different way. For example when our group measured the degree of deflection caused by the ostivily charged rod, we measured it close to the exit stream of the pepitte for each of the compounds instead of further down on the beaker. This was not nesserally incorrect procedure considering that we had used the same location of measurement for all tested compound, but, it did make it slightly harder for our group to judge what the precise degree of delectation was. This could be simply changed for the next test by recording our results from lower down the stream. One of the largest mistakes our group did though was that we did not retest our degree of deflection tests numerous times. We only would record the degrees once and then leave it alone. We had only one test and one result for each compound tested. Our method could have allowed some very false results to be recorded. To improve the accura cy of our results for next would be to retest each compound`s degree of deflection test 3 to 5 times in order to average it in the end. ...read more.

In regards to the charged ruler, here existed another flaw in the results. The biggest problem with the ruler is that there was no way to tell how charged the ruler was. To charge the ruler we would remove electrons by rubbing the ruler with a woolen cloth. The obvious problem was that we did not have a controlled time set to charge the stick. So when testing the polarity of set substances some tests were using a less polarized rod, which could have if it occurred greatly, changed the results. For next time our group should set a controlled time of 45 seconds so it's enough to fully polarize the rod but, also short enough so that we can repeat the tests for each substance without any time concerns. And yet another flaw occurs when we measured the deflection of the substances with a protractor, which was held at random distances away from the stream. Although it doesn't in any way affect our degree of deflection it did though, make it harder for me the degree reader to read the correct degrees. To add on to this problem we also did not hold our protractor straight and we often recorded the degrees of deflection with a shaky hand. What we could have done is lock the protractor in clamps and put it in a certain location throughout the entirety of the experiment. ...read more.