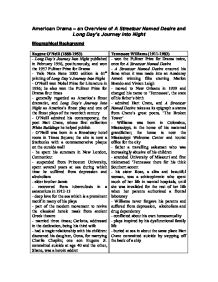 American Drama - an Overview of A Streetcar Named Desire and Long Day's Journey into Night Biographical Background Eugene O'Neill (1888-1953) Tennessee Williams (1911-1983) - Long Day's Journey Into Night published in February 1956, posthumously, and won the 1957 Pulitzer Prize for Drama - Yale Nota Bene 2002 edition is 61st printing of Long Day's Journey Into Night - O'Neill won Nobel Prize for Literature in 1936; he also won the Pulitzer Prize for Drama four times - generally regarded as America's finest dramatist, and Long Day's Journey Into Night as America's finest play and one of the finest plays of the twentieth century - O'Neill admired his contemporary, the poet Hart Crane, whose first collection White Buildings he helped publish - O'Neill was born in a Broadway hotel room in Times Square; the site is now a Starbucks with a commemorative plaque on the outside wall - he spent his summers in New London, Connecticut - suspended from Princeton University, spent several years at sea during which time he suffered from depression and alcoholism - elder brother Jamie - recovered from tuberculosis in a sanatorium in 1912-13 - deep love for the sea which is a prominent motif in many of his plays - part of the modern movement to ...read more.

Still, something, at least for the moment, helps him to build a tower, "not stone," but a tower of "pebbles" that "lifts love in its shower." This fragile love is what most rings true in the poem, for love always seems tenuous, fleeting, threatening to destroy us, to leave us, or, perhaps worst of all, to silently erode to "habit." (Webster, Loren, 2003, Crane's 'The Broken Tower', from In a Dark Time ... The Eye Begins to See, http://www.lorenwebster.net/In_a_Dark_Time/2003/08/20/cranes-the-broken-tower/) Excerpt from The Great Gatsby by F.Scott Fitzgerald On the last night, with my trunk packed and my car sold to the grocer, I went over and looked at that huge incoherent failure of a house once more. On the white steps an obscene word, scrawled by some boy with a piece of brick, stood out clearly in the moonlight, and I erased it, drawing my shoe raspingly along the stone. Then I wandered down to the beach and sprawled out on the sand. Most of the big shore places were closed now and there were hardly any lights except the shadowy, moving glow of a ferryboat across the Sound. And as the moon rose higher the inessential houses began to melt away until gradually I became aware of the old island here that flowered once for Dutch sailors' eyes-a fresh, green breast of the new world. ...read more.

describes the name "Desire" of the streetcar which carries Blanche to Elysian Fields; it is also a symbol with the rails carrying 'desire' one way to an ironically titled 'paradise' - in Greek myth Elysian Fields is the final resting place of the god-chosen blessed - "weathered grey" two-storey houses with "rickety" outside stairs of "faded white" - play opens and closes with the "turquoise sky" but this sky is contrasted by the "lurid" and "raw" interior light of the poker night in Scene Three - in the opening stage directions it says the "tender blue" light of early evening "gracefully attenuates the atmosphere of decay" - it is early May and the play ends several weeks later, in midsummer - indoor light motif contrasts the "lurid nocturnal brilliance, the raw colours of childhood's spectrum" with Blanche's desire to soften the rawness of the light, diminish its harshness with the Chinese lampshade - music is integral to the play, with "Blue Piano" to represent "the spirit of life which goes on here" and the "polka" to highlight the influence of Blanche's tragic past and her growing anxiety and dislocation from reality - sound effects of a busy and lively street described as "a confusion of street cries like a choral chant" (p. ...read more.