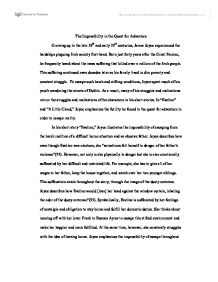 The Impossibility in the Quest for Adventure

The Impossibility in the Quest for Adventure Growing up in the late 19th and early 20th centuries, James Joyce experienced the hardships plaguing Irish society first-hand. Born just forty years after the Great Famine, he frequently heard about the mass suffering that killed over a million of the Irish people. This suffering continued even decades later as his family lived in dire poverty and constant struggle. To escape such harsh and stifling conditions, Joyce spent much of his youth wandering the streets of Dublin. As a result, many of his struggles and realizations mirror the struggles and realizations of the characters in his short stories. In "Eveline" and "A Little Cloud," Joyce emphasizes the futility he found in the quest for adventure in order to escape reality. In his short story "Eveline," Joyce illustrates the impossibility of escaping from the harsh realities of a difficult home situation and an abusive father. ...read more.

She notes that on one hand, leaving home would mean she would leave the people she had known her whole life and would also prevent her fulfilling the promise she had made to her dead mother to stay. She also worried about what people would say if she ran away with Frank. However, only a few sentences later, she expresses her desire to travel to a "distant unknown country" where she would be married and where "people would treat her with respect"(33). Eveline's conflict climaxes at the end of the story when she can't bring herself to board the ship to Buenos Ayres with Frank. Joyce describes how "all the seas of the world tumbled about her heart" and how Frank "would drown her"(36). Just as the dusty cretonne of her home situation is suffocating, Eveline's quest for adventure and escape from that situation make her feel as if she is drowning. ...read more.

He also notices that they had no passion, especially when compared to the rich Jewesses that Gallaher had described so vividly. Little Chandler noted how their "dark, oriental eyes" were so full of passion and asked himself "why had he married the eyes in the photograph?"(81). At this point, Little Chandler's desire for adventure is seen most clearly. He asks himself "could he not escape from his little house? Was it too late for him to try to live bravely like Gallaher?"(81). As he holds his child in his arms his question is answered; he realizes that his quest is hopeless. As the child cries, the poems that Little Chandler had been reading become less and less auditable. The poems, written by a romantic Irish poet, seem to represent the possibility for Little Chandler to escape. As the child's cries take over the poetry, reality also takes over the possibility of adventure and escape for Little Chandler. He now realizes that he is in fact "a prisoner for life"(82). ...read more.