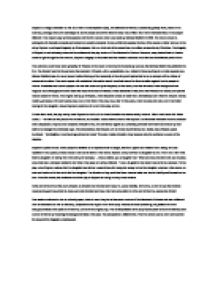 The Merchant of Venice. The audience would have more sympathy for Shylock in the movie version by the 'humanising' sources that Michael Reford has added to the film.

Shylock is a tragic character as well as a villain in Shakespeare's play, The Merchant of Venice. Excessively greedy villain, harsh in his business, strongly shows the stereotype of Jewish people around the time the story was written. His twofold characteristics are displayed different in the original play by Shakespeare and the film version which was made by Michael Redford in 2005. The movie version is portrayed with dramatic elements and almost no comedic elements. It shows different aspects, the flow of the scene is rather serious. In the story, Shylock is portrayed tragically by Shakespeare. He is a villain but at the same time, he suffers persecution by Christians. The tragedy of Shylock is not noticeably shown to the audience In the play version of The Merchant of Venice. However, many behind facts in Venice come to light through the film version, Shylock's tragedy is articulated and the modern audience would find out the different point of view. ...read more.

Shylock merely mutters, grimaces at him and seems less like a villain than in the play. Also, later in the scene, when he sobs and walks out in bare feet looking for his daughter, shows Shylock's emotion and is not in the play version. On the other hand, the play mainly uses Shylock to build up to a climax therefore he seems merely immoral. 'Mark what Jacob did: When Laban.." - he refers to the person who he follows, his ancestor Jacob and this shows that Shylock is a dishonest character alike his ancestor and is despicable. Shylock also compares himself to him, who Christians regard as a scheming character and had to be broken by God before he changed his dishonest ways. This foreshadows that Shylock will be broken by Christians too. Asides make Shylock seem two-faced - ''[Asides]How like a fawning publican he looks!' ...read more.

From this scene, the audience would feel pity to Shylock for losing his only blood relative. At the end of the trial at the court, Shylock is forced to be Christian and loses his Jewish identity. In the film, we do not see that Antonio receives the good news that his ships were not stranded and have returned safely after all at the end of the film, seems the director The modern audience's view is culturally open, which is more likely to be the movie version of The Merchant of Venice and has a different view of characters as well as the story, compared to the original view of the play. Pictures of r****t preaching, the ghetto and all the background facts in the past are in the film, but not in the original play. The reinterpretation of the play has focused more on the fairness and culture of Venice by revealing the background facts in the past. The perspective is different too. The film version seems more serious than the play and the tragedy is emphasised. ...read more.