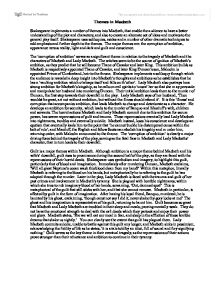 Themes in Macbeth Shakespeare implements a number of themes into Macbeth, that enable the audience to have a better understanding of the plot and characters; and also to create an alternate set of ideas and motives to the general play itself. Shakespeare uses soliloquies, asides and a number of other dramatic techniques to add emphasis and further depth to the themes. The major themes are: the corruption of ambition, appearance versus reality, light and dark and guilt and conscience. The 'corruption of ambition' serves as a significant theme in relation to the tragedy of Macbeth and the characters of Macbeth and Lady Macbeth. The witches seem to be the source of ignition of Macbeth's ambition, as they predict that he will become Thane of Cawdor and later King. This ambition builds as Macbeth is respectively appointed Thane of Cawdor, and later King Duncan's son, Malcolm is appointed Prince of Cumberland, heir to the throne. Shakespeare implements a soliloquy through which the audience is revealed a deep insight into Macbeth's thoughts and ambitions as he establishes that he has a 'vaulting ambition which o'erleaps itself and falls on th'other'. Lady Macbeth also portrays here strong ambition for Macbeth's kingship, as he calls on evil spirits to 'unsex' her so that she may persuade and manipulate her husband into murdering Duncan. ...read more.

Macbeth states, 'Ere we will eat our meal in fear, and sleep in the affliction of these terrible dreams that shake us nightly.' You can clearly see the extent that guilt has plagued them. Lady Macbeth commits suicide, unable to battle against this guilt any longer; and Macbeth sinks in pessimism; acknowledging the futility of life as he states, 'it is a tale told by an idiot, full of sound and fury signifying nothing.' Guilt serves as the key theme in their eventual tragedy; as the repercussions of their actions prove stronger than their reluctance and ambition to continue in their tyranny. 'Appearance versus reality', is another key theme in the play, and a central motive behind many events that occur throughout the plot. There is a frequent ambiguity that occurs in our understanding of the play, and also within the play itself. In the very first scene of the play, the witches state, 'fair is foul, and foul fair'. Through this paradox, the audience can already sense the ambiguity associated with the witches and the idea that everything isn't as it seems. Shakespeare weaves dramatic irony into his play, as only just after hearing of Macbeth's 'black and deep desires' to murder Duncan to obtain kingship; King Duncan states, 'There's no art to find the mind's construction in the face'. ...read more.

The murder of Banquo and Macduff's wife, children and servants all occur during the night; representing the evil alongside these atrocities. Macbeth's commitment to darkness and evil is fortified when he kills Duncan; and with him in power, 'the night is long that never finds the day.' That is to say, evil will continue to reign in Scotland until Malcolm is restored to power. His commitment to darkness, is strongly associated with his growing connection with the witches, referred to as 'instruments of darkness' and 'black and midnight hags'. You can clearly see that these witches are representative of evil in the play, and Macbeth's increase in relation with them, strongly relates to the theme of 'light and dark'. With Macbeth's increase in commitment to darkness, 'good things of day being to droop and drowse, while night's black agents to their prey do rouse'. This metaphor is an excellent image, that encapsulates the decay of light and good in the play, with the rise of darkness and evil. This is essentially the key concept behind the theme of light and dark within the play. You can clearly see that Shakespeare uses themes to express various ideas associated with the play. He also implements various dramatic techniques, such as soliloquies, asides, imagery and symbolism to highlight the themes and deepen the audiences understanding of the themes, characters and play. ...read more.