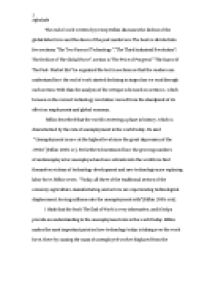 Analysis of &quot;The End of Work&quot; by Jeremy Rifkin discusses the decline of the global labor force and the dawn of the post market era.

﻿Agbolade The end of work written by Jeremy Rifkin discusses the decline of the global labor force and the dawn of the post market era. The book is divided into five sections; ?The Two Faces of Technology ?,?The Third Industrial Revolution?: The Decline of The Global Force?, section 4:?The Price of Progress? ?The Dawn Of The Post- Market Era? he organized the text in sections so that the readers can understand how the end of work started declining in stages has we read through each section. With that, the analysis of the critique is focused on section 1, which focuses on the current technology revolution viewed from the standpoint of its effect on employment and global economy. Rifkin described that the world is entering a phase in history, which is characterized by the rate of unemployment in the world today. He said ? Unemployment is now at the highest level since the great depression of the 1930s? (Rifkin 2005: xv). He furthered mentioned how the growing numbers of underemployed or unemployed and new extrants into the workforce find themselves victims of technology development and new technologies are replacing labor force. ...read more.

Further more, Rifkin argues that many of blue collar jobs like receptionist sale clerks and telephone operators and wholesalers are just many of occupations that are destined for virtual extinctions, while the jobs that are been created to replace the old jobs are lower paying jobs. While I think that Rifkin analysis on some of the blue collar jobs being virtual extinction is true, however, he forgets or neglects to include Liberians to his list, today most Liberians are losing their jobs due to the development of electronic data system, the electronic systems are able to search and transmit articles and give information half the time that a Liberian would perform the same task. In addition, Rifkin argued that even though ?retraining on a mass scale was built, not enough high tech jobs will be available in the automated economy of the 21st century to absorb the vast numbers of dislocated worker (Rifkin 2005:37). I agree to Rifkin on this point because, using the statistics of graduate student or adults that have gone back to school as template to gain advantages of over next person that is applying for the same job, and have not gotten a job in their chosen field the numbers are vastly large. ...read more.

The idea of trickle down technology argues that technological innovations, advances productivity, and falling price will create sufficient demand and lead to the creation of newer jobs (Rifkin 2005:40). I think that Rifkin argument on trickling down technology in other to increase the availability of jobs great, his theory is that laborsaving technology would increase productivity and give the chance to produce more goods and less cost. In conclusion, The End of Work provides a wealth of information that can help reduces the unemployment rate in the world today. One the most important thing we should ask ourselves while reading The End of Work, is how does the effect of what Rifkin is arguing about affect our lives? As a student I will say that it is scary to enter employment workforce when I graduate because, I have seen the level of rejection my friends get because of there are no sufficient jobs to attain the number of graduates. I also think if technological advancement keep growing at rate that it going, graduates would need more certificate other than undergraduate degree or master or PhD, to enter the workforce because of the technological advancement. ...read more.