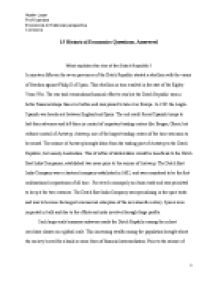 15 Historical Economic Questions on Mercatilism and the Development of European Countries.

﻿Austin Lazar Prof.Kypraios Economics in Historical perspective 12/7/2012 15 Historical Economics Questions, Answered What explains the rise of the Dutch Republic? In nineteen fifty-six the seven provinces of the Dutch Republic started a rebellion with the vision of freedom against Philip II of Spain. This rebellion in turn resulted in the start of the Eighty Years War. The war took tremendous financial effort to win but the Dutch Republic was in better financial shape than ever before and was poised to take over Europe. In 1585 the Anglo-Spanish war breaks out between England and Spain. The end result forced Spanish troops to halt their advances and left them in control of important trading centers like Bruges, Ghent, but without control of Antwerp. Antwerp, one of the largest trading centers of the time was soon to be seized. The seizure of Antwerp brought labor from the trading port of Antwerp to the Dutch Republic, but mainly Amsterdam. This of influx of skilled labor would be beneficial to the Dutch East India Companies, established two years prior to the seizure of Antwerp. The Dutch East India Company was a chartered company established in 1602, and was considered to be the first multinational corporations of all time. Received a monopoly on Asian trade and was permitted to keep it for two centuries. The Dutch East India Company was specializing in the spice trade and was to become the largest commercial enterprise of the seventeenth century. Spices were imported in bulk and due to the efforts and risks involved brought huge profits. Such large-scale business endeavors made the Dutch Republic among the richest merchant classes on a global scale. This increasing wealth among the population brought about the society?s need for a bank or some form of financial intermediation. Prior to the seizure of Antwerp was the existence of Antwerp?s stock exchange otherwise known as a bourse. ...read more.

The first of the major European trading 'forts', Elmina, was founded on the Gold Coast in 1482. Elmina was modeled on the Castelo de Sao Jorge, the first of the Portuguese Royal residence in Lisbon. Elmina, which of course, means the mine, became a major trading center for slaves purchased along the Slave Rivers of Benin. Sugar became more lucrative in the world market than salt, which had been a staple for centuries. The success of the sugar industry led to the formation of the plantation system. By the beginning of the colonial era there were forty such forts operating along the coast. Rather than being icons of colonial domination, the forts acted as trading posts which they rarely saw military action. The end of the fifteenth century was marked (for Europe) by Vasco da Gama's successful voyage to India and the establishment of sugar plantations on Madeira, Canary, and Cape Verde Islands. Rather than trading slaves back to Muslim merchants, there was an emerging market for agricultural workers on the plantations. By 1500 the Portuguese had transported approximately 81,000 slaves to these various markets. Portugal?s success through the sugar industry brought worldwide interest in the sugar industry and plantations. As surrounding territories in the western hemisphere developed and advanced as societies, agricultural, textile and many other industries began to emerge and grow stronger and thus more demanding of capital goods. The demand for labor inevitably expanding at an exponential rate and the economic advantages of slaves in contrast to paid labor was becoming a large attraction. The sugar plantation, agriculture and other industries began to spread and it was becoming obvious that the slave trade?s profitability was a derivative of the growth of those industries. As the slave trade caught more and more global attention the transatlantic slave trade was established. The rise of slavery begun with Portuguese merchants of who essentially operated a monopoly, the profitability became apparent as the transatlantic slave trade was established through other country?s interest. ...read more.

Access to water, aside from its health and agricultural benefits would later on provide an unimaginable privilege upon the advent of trade. Goods, which prospered in such central, white dominated regions, prospered because of their resources. These abundant resources in tandem with a large population allowed them to produce or simply collect goods easier than other regions. By easier, these countries gave up less than other countries in producing goods due to efficient methods of production. This was a comparative advantage and served Europeans greatly upon the advent of trade, as many countries would demand imports. Though, this would be a bit later in history than Yali was truly concerned about. The initial advancement of agriculture had to be the first step towards guns, germs, and steel. Being the economic staples of every nation at the time, the first to advance would be the closest to innovation. Information during such a primitive era was as illiquid as possibly imaginable. The planets, which may have water sources today, and potential to prosper are not within our realm of knowledge even today. Oversea regions had a similar perspective on the emerging European nations as we have on these planets today. Such capitalization of God-given advantages was able to occur and develop in these nations while isolated regions were unbeknownst to such advanced schools of thought. Lack of exposure to new schools of thought left isolated regions merely incompetent in societal progression. Some regions like New Guinea, regardless of copious water, was slow to advance because of the information which was unrefined but still adhered to. Is this advantage a result of the white race being genetically inclined towards thinking? This question would typically be refuted with the fact that their geographical location served them their advancing privileges. This is what I believe was the deciding factor in Yali?s question. But it could be argued that the early white colonization of the two most advantageous geographical regions was a result of incontestable logic and problem solving skills, it?s all in the eyes of the reader. ...read more.