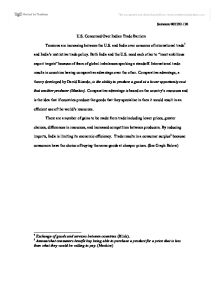 U.S. Concerned Over Indian Trade Barriers Tensions are increasing between the U.S. and India over concerns of international trade1 and India's restrictive trade policy. Both India and the U.S. need each other to "meet ambitious export targets" because of fears of global imbalances sparking a standoff. International trade results in countries having comparative advantage over the other. Comparative advantage, a theory developed by David Ricardo, is the ability to produce a good at a lower opportunity cost that another producer (Mankiw). Comparative advantage is based on the country's resources and is the idea that if countries produce the goods that they specialize in then it would result in an efficient use of the world's resources. ...read more.

Trade also results in domestic suppliers losing out. This is why trade barriers and protectionism4 are employed. Trade barriers are any government policy or regulation that restricts international trade (Mankiw). In this case, India has placed tariffs5 on imports from the U.S. (See Graph Below) The graph above illustrates how after the tariff is placed, the market price rises causing a decreased quantity demanded. The law of demand says when other things equal, the quantity demanded of a good falls when the price of the good rises (Mankiw). (See Graph Below) Domestic producers increase supply after price increases, and foreign producers supply for the rest of the demand. Foreign producers' revenue falls because they have to pay tariffs to the government. ...read more.

The U.S. has said that it would ease restrictions on exports of high-technology goods to India in recognition of strong economic ties. The result of a tariff is reduced surplus and increased price. Tariffs can hurt an economy by reducing trade but also help protect some domestic jobs at the expense of consumers. Critics argue that trade barriers create fewer choices for consumers and the distortion of comparative advantage, resulting in the unproductive use of the world's resources. The Indian and U.S. governments should eliminate trade barriers so that they may reach the effectual outcome that would allow them to allocate their resources properly and efficiently. By eliminating tariffs, both countries could only produce what they specialize in and still obtain everything else they need from imports. Also, instead of worrying about trade barriers, the governments should invest more in education and make their workers more efficient. ...read more.