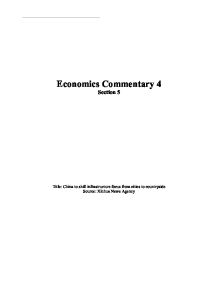 Economics Commentary 4 Section 5 Title: China to shift infrastructure focus from cities to countryside Source: Xinhua News Agency China's leaders have promoted economic growth in the recent decades. This strategy is successful in terms of increasing the nation's output, yet the inequality in living standards between the cities and the rural areas are also increasing as the riches do not trickle down to the poor. Thus this article discusses how government now sees the need to focus on rural development and improving inequality and rural productivity. To increase economic growth, according to the Harrod Domar model China increased productivity by lowering the capital to output ratio and increase savings so as to promote economic growth. The opposite of the poverty cycle occurs, as people get richer they will have a lower marginal propensity to consume, hence save more. The end result is that they will have higher productivity and income, hence leaving poverty. This implies the need for expanding human and fixed capital, encouraging industrialization. Low Investment Low Productivity Poverty Cycle Low Savings Low Income Due to economies of concentration, industries are more productive when grouped together. ...read more.

With the failure of the trickle down effect, the government should intervene in the market by increasing rural infrastructure. Since living standards are measured in terms of economic development instead of merely economic growth, intangible factors such as availability of drinkable water, sanitation and education are considered. Without these life in the rural areas would be horrible, thus limiting the productivity of rural labor, which forms most of the population of labor in the country. Since income is a crucial part of one's living standard, in order to improve the income of farmers there is also a need to increase agricultural productivity and promote rural industrialization. For example, the government may invest or subsidize technological improvements in seed technology to increase crop yield of farmers, or promote mechanization and better irrigation in farming. Secondly, to diversify rural "small cottage industries" the government may promote cultural industries such as hand crafting or eco-tourism in rural areas. This will provide an alternative to agriculture, which is prone to low income elasticity and thus low income for farmers. By increasing the income of rural populations the income equality in China will increase. ...read more.

dollars), less than 1 percent of the fiscal income. Currently, half of China's villages do not have running water. Besides, former investment in rural areas mainly focused on macro-projects like riverbank construction, and failed to directly benefit the farmers for most of the time. To narrow down the increasing gab [sic] between urban and rural areas, the Chinese government decided to" let the sunlight of public finance shine in the countryside ", to promote construction of road, water, electricity and other infrastructure in rural areas. Experts with the State Development and Reform Commission predicted that to build basic infrastructure in rural areas across the nation will cost at least 4 trillion Yuan (495.66 billion U.S. dollars). Therefore, other fund sources are needed to explore besides government spending. Tang Min, chief economist of Asian Development Bank in China, said that reform of rural financial system is as pressing as investment in rural economic development and the improvement of the farmers' life. Farmers are hard to get loans due to out-of-date financial mechanisms. Government statistics show that at least 200 billion Yuan (24.78 billion U.S. dollars) worth of funds are drawn from the rural areas by the financial entities every year. Copyright (c) 2005 Xinhua News Agency ...read more.