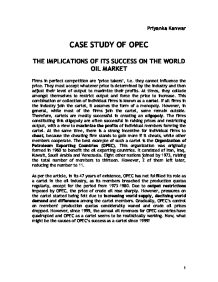 Priyanka Kanwar CASE STUDY OF OPEC THE IMPLICATIONS OF ITS SUCCESS ON THE WORLD OIL MARKET Firms in perfect competition are 'price takers', i.e. they cannot influence the price. They must accept whatever price is determined by the industry and then adjust their level of output to maximize their profits. At times, they collude amongst themselves to restrict output and force the price to increase. This combination or collection of individual firms is known as a cartel. If all firms in the industry join the cartel, it assumes the form of a monopoly. However, in general, while most of the firms join the cartel, some remain outside. Therefore, cartels are mostly successful in creating an oligopoly. The firms constituting this oligopoly are often successful in raising prices and restricting output, with a view to maximize the profits of individual members forming the cartel. At the same time, there is a strong incentive for individual firms to cheat, because the cheating firm stands to gain more if it cheats, while other members cooperate. The best example of such a cartel is the Organization of Petroleum Exporting Countries (OPEC). This organization was originally formed in 1960 to benefit the oil exporting countries. ...read more.

the level of output which gives maximum joint profits, will be at a point where MR for the industry as a whole is equal to MC of the industry as a whole. Thus, the total market demand for oil will first be estimated which the countries under this Cartel are to produce. Since Oligopoly is a case of market imperfections, the demand curve for the industry will be downward sloping as shown by D=AR in Fig.1(c). Fig.1(a) shows the AC and MC of Country A, while Fig.1(b) shows the AC and MC of Country B. Assuming that these are the only two countries in the cartel, then the Cartel's MC curve is given by the horizontal summation of the marginal cost curves of the two countries. Thus, the MC curve of the Cartel, MCc = MCa + MCb; where MCa and MCb are the marginal cost curves of Country A and B respectively. Point of Equilibrium The point of equilibrium for a cartel is the point of maximum joint profits. Thus, for the Cartel (the industry as whole), D=AR is the demand curve facing it and therefore, MR is the Marginal Revenue curve. This curve intersects with MCc at a point G, which gives OQ level of equilibrium output and OP price per unit. ...read more.

Hence, the situation is increasingly becoming uncertain to predict. Whatever may happen, the long term threat of OPEC's power will remain and it will be hard to curb it, unless steps are taken to curb world demand. Terminology: ==> CARTEL: A cartel is a formal (explicit) agreement among firms. Cartels usually occur in an oligopolistic industry, where there are a small number of sellers and usually involve homogeneous products. Cartel members may agree on such matters as price fixing, total industry output, market shares, allocation of customers, allocation of territories and the division of profits or combination of these. ==> OLIGOPOLY: An oligopoly is a market form in which a market or industry is dominated by a small number of sellers. There is a high degree of interdependence among the firms. Each firm has enough market power to prevent itself from being a price taker; however, each firm is subject to enough inter-firm rivalry to prevent it from considering the market demand curve as its own. ==> PROFIT MAXIMIZING LEVEL OF OUTPUT: It is obtained where a firm's Marginal Cost (MC) is equal to its Marginal Revenue (MR) and the MC curve intersects the MR curve from below. Citation: * Definitions with reference from: www.wikipedia.com * History of OPEC: www.opec.org ?? ?? ?? ?? 1 ...read more.