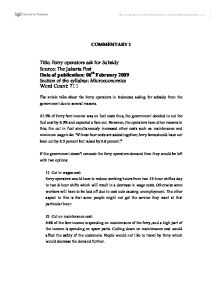 COMMENTARY 1 Title: Ferry operators ask for Subsidy Source: The Jakarta Post Date of publication: 06th February 2009 Section of the syllabus: Microeconomics Word Count: 711 The article talks about the Ferry operators in Indonesia asking for subsidy from the government due to several reasons. 27.5% of Ferry fare income was on fuel costs thus, the government decided to cut the fuel cost by 3.5% and expected a fare cut. However, the operators have other reasons to this; the cut in fuel simultaneously increased other costs such as maintenance and minimum wage hike. "If these four costs are added together, ferry fares should have not been cut by 3.5 percent but raised by 9.8 percent." If the government doesn't concede the ferry operators demand then they would be left with two options: 1) ...read more.

are demanding for an increase in minimum wage (P2) because prices of basic commodities have soared. However this would further increase the operations cost to the ferry operators thus ferry operators are asking the government to suspend the minimum wage hike. Subsidy is a payment made by the government to the producers of good and services.1 With the government offering subsidy there is an outward shift of the supply curve as shown in Figure 1 to the right. This causes an increase in the quantity supplied from Q1 to Q2 which also results in a decrease in the equilibrium price from P1 to P2. With the decrease in price Ferry will now be able to compete with its upcoming land substitute. The ferry as of now has an inelastic demand as ferry is the only mean of transport form Kamal route to Madura; if there is a small amount of increase in the price of the ferry prices, the quantity demanded will decrease less than proportionately. ...read more.

If the government doesn't provide subsidies Ferry operators are likely to increase ferry fares this would cause the demand to decrease, thus causing unemployment. Here the producers aren't satisfied as demand is low (low profits), trade unions because workers are being laid off, government isn't satisfied as there is unemployment in the economy and consumers due to high ferry fares. If the government provides subsidy operational cost would decrease, thus decreasing prices of tickets. As prices of tickets decrease the consumers are likely to benefit and demand is likely to increase, workers might not be laid off and trade union's demands too will be satisfied. If only providing subsidy can satisfy all the demand the government should provide subsidy. However it should consider the opportunity cost involved in providing subsidy. 1 Glanville, Alan.629 2 Glanville, Page number: 56 3 Blink, Jocleyn and Dorton, Ian. Page no 10 ?? ?? ?? ?? ...read more.