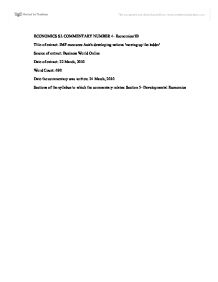 Sections of the syllabus to which the commentary relates: Section 5- Developmental Economics

This article addresses the structure, stability, and growth system of developing countries.  One major point this article makes that is important to note is that all developing nations have different, wide-ranging preconditions and problems.  However, most of the time, solutions to problems and main issues are similar.

Specifically, the article addresses certain problems faced by struggling countries in Southeast Asia.  For example, the need for basic public services such as health-care, food and shelter. Stable programs like these are necessary for sustaining an organized economy and a strong government infrastructure.  The article mentions that increased integration into the global economy is a very important aspect in the growth process. What creates a stable economy is a country's ability to cooperate with other countries, balancing imports with exports. Boosting competitiveness is also a crucial aspect of making sure that a country creates a stable role in the trade system.  Most of these developing countries are in Southeast Asia; therefore, in theory it should not be too difficult for international cooperation to come from larger economies such as China or Japan.

These reasons, however, are only some aspects of these developing countries that make it difficult for growth.  For example, many countries have large deficits and public debt, high credit growth as well as inflation.  These are signs of a highly unstable economy, and are big issues that must be faced soon, or else these factors will only increase in multitude.  As the article states, the Asian Development Bank speculates that these countries would need to invest approximately $8 trillion over the next ten years in order to gain more prosperity in the next upcoming decades.  Figure 1 displays the change in the standard aggregate supply and demand curves as these problems are not faced.

According to the article climate change is one of the greatest long term risks for the developing countries, specifically in Southeast Asia, since it is one of the most vulnerable regions of the world.  In order for long term stabilities, these countries need to adapt to these climate changes in order to be successful in its growth process.  It is thought that if climate change is not addressed, Southeast Asia could lose about 6.75% gross domestic product each year.

There are many causes for the increase in poverty in these countries.  The factors that affect the change in poverty are the distribution of income, inflation, failure to include environmental degradation, and failure to consider the kind of goods produced.  These factors are prevalent in these countries.  Research shows that these countries are not prominent figures in the international economy.  There is no specialization of goods in these countries.  The increase in national growth often times harms the environment.  Thus, countries that struggle with growing or grow too fast, have negative externalities, such as harming the land by over-fertilization, or destruction of land and resources.  Much of the poverty in these countries is caused by the high levels of inflation in the economy.  Because there is little specialization, people are struggling to make a living through their individual trades.  Therefore, there is a lot of inflation.

Developing countries have a lot of issues they need to face.  Debt and high deficit among basic needs among the population are just some of the problems that need to be addressed over the next few months and years.  These issues are only going to be faced if these countries have cooperation from other more thriving economies.  Many of these developing economies have dug themselves into a huge hole of debt, and although government spending may not be very possible in a downturned economy, it is the only way that some of these issues can be solved.  If these issues are face, these countries in Southeast Asia could grow to become reasonable assets to the global economy.