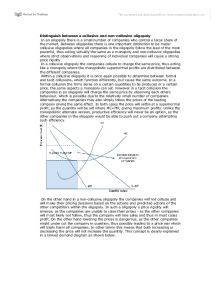 On the other hand lowering the prices is dangerous, as the other companies might under cut the company in question, thus possibly leading to a price war which will likely harm all companies. In other terms this means that both increasing or decreasing the price will not increase the quantity. This concept is clearly explained in a kinked demand diagram as shown below. Concluding a collusive oligopoly will produce with a supernormal profit and will - most likely - be harmful to the consumer. On the other hand a non-collusive oligopoly is not directly harmful to the consumer and may be advantages due to aspects like economies of scale, however there is always the danger that it might change to a tacit collusive oligopoly. Evaluate the view that governments should maintain strong policies to control collusive behaviour by oligopolies. As collusive oligopolies behave like a monopoly various controls have been set up by different countries to stop and control collusive oligopolies or any behaviour which seems collusive. ...read more.

One of the other dangers of strong policies is that non-collusive oligopolies can also be easily targeted. This may happen when prices increase due to an outside effect (e.g. increase in resource prices), which might look to the government as if tacit collusion is occuring, as the outcome is exactly the same in both cases. Alternatively an oligopoly is not necessary aware that it is behaving collusively and differing between a tacit collusion and non-collusive oligopoly is not a straight line, but rather a gradient. In spite of these dangers, the disadvantage of a collusive oligopoly - where customers are overcharged for the product - are in general big enough for governments to set up some form of control, however the specific policies are quite different. Governments may decide to decrease taxation for new companies entering the market and prohibit the collusive oligopolistic companies to acquire these new companies, which are not necessary perceived as 'strong'-policies. Alternatively the government can set ceiling prices or sanction the collusive oligopolistic companies if they are believed to take part in a formal collusion. ...read more.