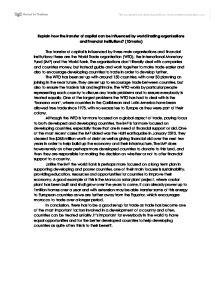 Explain how the transfer of capital can be influenced by world trading organisations and financial institutions?

Explain how the transfer of capital can be influenced by world trading organisations and financial institutions? (10marks) The transfer of capital is influenced by three main organisations and financial institutions; these are the World Trade organisation (WTO), the International Monetary Fund (IMF) and the World Bank. The organisations don't literally deal with companies and countries money, but instead guide and work together to make trade easier and also to encourage developing countries to trade in order to develop further. The WTO has been set up with around 150 countries, with over 30 planning on joining in the near future. ...read more.

Although the WTO is far more focused on a global aspect of trade, paying focus to both developed and developing countries, the IMF is far more focused on developing countries, especially those that are in need of financial support or aid. One of the most recent cases the IMF aided was the Haiti earthquake in January 2010, they cleared the $268 million worth of debt as well as giving financial aid over the next few years in order to help build up the economy and their infrastructure. The IMF does however rely on other perhaps more developed countries to donate to this fund, and then they are responsible for making the decision on whether or not to offer financial support to a country. ...read more.

grow over the years to come, it can already power up to 1million homes over a year and with extension may be able transfer some of this energy to European countries as we are further away from the Equator, which encourages morocco to trade over a longer period. In conclusion, there has to be a good setup for trade as trade has become one of the most important factors involved in a development of a country and often, countries can be treated unfairly. It's important for everybody in the world to have equal opportunities and for the better developed countries to help developing countries as quite often this is to their benefit. ...read more.