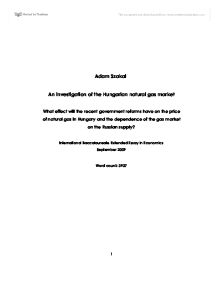 ( Sources: Questionnaires, Interview: Appendix 1.3 and Appendix 2.1) 4. Conclusion The purpose of this essay is to analyse the impacts of the changes made by the government in the Hungarian natural gas market in terms of the price of natural gas and the one-sided energy dependence of Hungary. Both the theoretical and practical results prove that the current changes are answers to existing problems: the old subsidy system was ineffective and did not support low incomes well. Also, it ate up a huge amount of money from the budget each year. The government decision has been successful in economic and social terms, because the new subsidy system has helped to reach the budget balance and with the price discrimination the subsidy system can be more focused on the poor's needs. Meanwhile, in political terms the decision has not been successful; people do not believe the new subsidy system is more equal. We cannot yet judge the liberalisation, but if the state can reduce the role of the E-ON in the market and can create competition, then the opening of the market will be successful and we can get lower prices. On the other hand, the people do not feel like that they are well informed, and their opinion is that the government did not think these changes over properly. We can see an issue of comprehension of situation between the theoretical impact and practical impact of the liberalisation. According to the theory, we are supposed to get a lower price in the open market, while according to the ministry; we would see a competition in quality and not in price. The reforms made to the Hungarian natural gas market by the government would probably repair some of the existing difficulties and provide some aid in the short term. However, the field of the natural gas--which is probably the most important and complex energy market--would not be changed deeply, nor effectively, and in the long-term the changes would not be fully beneficial. ...read more.

The government supports many investments from European Union sources that can reduce the one sided energy dependence. These are the KOEP programs, and other programs support the energy use efficiency like panel program, Green Investment System, NEP. 1 Hungarian Energy Office,2006,http://www.eh.gov.hu/gcpdocs/200407/bratislava.PPT 2 All government programs and schemes providing economic security for people needing special treatment, eg. healthcare for the ill. 3 An economy where individual decisions made by people and companies are dominant in the operation of the markets. 5 A market structure in which there is a single seller. 6 Privatization of the power and natural gas industries in Hungary and Kazakhstan, World Bank 7 Allocative efficiency occurs when the combination of goods produced and sold gives the maximum satisfaction for each consumer. At this point MC=AR. 8 Productive efficiency occurs when the production is the highest for a given amount of input or a given output is produced for the least cost. At this point AC=MC. 9 The total value of new goods and services produced in a given year within the borders of a country. 10 An unbalanced state of an economic system. 11 Increase in the overall price level of an economy. 12 The increase over time in the capacity of an economy to produce goods and services and (ideally) to improve the well-being of its citizens. 13 Source: http://logsped.hu/gazartamogatas.html 14 Price Elasticity of Demand (PED) measures the responsiveness of demand to the changes of price, ceteris paribus. 15 The effect of price on quantity demanded in relation to alternative goods. 16 The effect of price on quantity demanded in relation to real income. 17 The difference between the maximum that consumers would be willing to pay for a good and what they actually do pay. For each unit of the good, this is the vertical distance between the demand curve and price. For all units purchased at some price, it is the area below the demand curve and above the price. 18 The sale by a firm to buyers at two different prices. 19http://4.bp.blogspot.com/_DEJNL8HLMpg/SDV1fbhDuoI/AAAAAAAAAFo/phwnsEAZzqo/s400/oligopoly.jpg 20 Source of data: Hungarian Energy Office, 2006, http://www.eh.gov.hu/gcpdocs/200407/bratislava.PPT ?? ?? ?? ?? 1 ...read more.