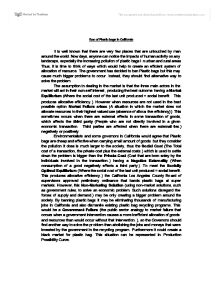 IB Economics Article Commentary. Effects of the Ban of Plastic bags in California.

Ban of Plastic bags in California It is well known that there are very few places that are untouched by man around the world. Now days, anyone can notice the impacts of human activity on any landscape, especially the increasing pollution of plastic bags in urban and rural areas Thus, it is time to think of ways which would help to create an efficient system of allocation of resource. The government has decided to ban Plastic bags but this may cause much bigger problems to occur. Instead, they should find alternative way to solve the problem The assumption in dealing in the market is that the three main actors in the market will act in their own self interest, producing the best outcome having a Market Equilibrium (Where the social cost of the last unit produced = social benefit. ...read more.

having a Negative Externality (When consumption of a good negatively effects a third party). To meet the Socially Optimal Equilibrium (Where the social cost of the last unit produced = social benefit. This produces allocative efficiency.) the California Los Angeles County Board of supervisors approved preliminary ordinance that bands plastic bags at super markets. However, this Non-Marketing Solution (using non-market solutions, such as government rules, to solve an economic problem. Such solutions disregard the forces of supply and demand.) may be only creating a bigger problem around the society. By banning plastic bags it may be eliminating thousands of manufacturing jobs in California and also dismantle existing plastic bag recycling programs. This would be a Government Failure (the public sector analogy to market failure that occurs when a government intervention causes a more inefficient allocation of goods and resources than would occur without that intervention.), so ...read more.

to solve the problem. By choosing Coarse Theorem consumers will maximize utility and suppliers will be able maximize profits and there will be also no transaction costs between the suppliers and consumers. However firms may meet pollution objective with lower costs, causing more problem to occur in the environment. However, California can choose to tax their goods. It could have disadvantage, discouraging investment and production of plastic bags. Taxing the price of plastic bag will shift the market supply curve to social cost curve achieving the social optimal equilibrium. In short term government will be able to earn revenues as the rise of price due to tax will not be easily recognizable as the % of customer's total budget will be minimal. However in long term people will slowly recognize the price and carry their own bags to save money. This will achieve the goal of saving the environment. ?? ?? ?? ?? ...read more.