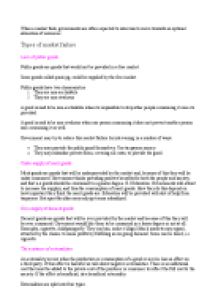 ﻿When a market fails, governments are often expected to intervain to move towards an optimal allocation of resources. Types of market failure Lack of public goods: Public goods are goods that would not be provided in a free market. Some goods called quasi pg, could be supplied by the free market. Public goods have two characaristics 1. They are non-excludeble 2. Thay are non-rivalrous A good is said to be non-excludeble when its impossible to stop other people consuming it once its provided. A good is said to be non-rivalrous when one person consuming it does not prevent another person som consuming it as well. Government may try to reduce this market failure by intervening in a number of ways. ...read more.

Education will be provided with alot of help from taxpayers. But sport faculties may only get some subsidized. Over-supply of demerit goods Demerit goods are goods that will be over provided by the market and because of this they will be over consumed. Goverment would like them to be consumed in a lesser degree or not at all. Examples, cigaretts, childponografy. They can ban, make it illigal (black markets may appar), attracted by the chance to make profits by fulfilling an on going demand. Some can be taxed, i.e cigaretts. The existence of externalities An externality occurs when the production or consumption of a good or service has an effect on a third party. If this effect is harmful we talk about negative externalities. ...read more.

MPC<MSC. The government can: Tax the firm, they could ban, could issue tradeble emission permits. Tradeble emission permits: The government dicides upon a level of pollution each year. Give TEP to individual firms (a max pollution) and then they can buy from each other. Positive externalities of production: benefit the third party. E.I a training at a job. Nagative externalities of consumtion Consumed by individual negativly affects the third party. E.i. Cigaretts. Government can ban smoking. Government can impose indirect tax smokes. Government can advertice and educate in the dangers in smoking. Positive externalities of consumption provide external benefits to the third party. E.I. Health care. MSB>MPB. Government wiching to increase the consumtion can: Subsidize the supply of health care. Positive adverticing. Have laws that say you have to have health care. COMMON POOL REASOURCES. Reasources that are difficult and expencive to exclude people from. ...read more.