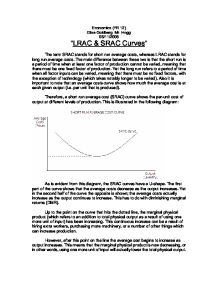 Economics (YR 12) Gina Goldberg Mr. Hogg 08/11/2008 "LRAC & SRAC Curves" The term SRAC stands for short run average costs, whereas LRAC stands for long run average costs. The main difference between these two is that the short run is a period of time when at least one factor of production cannot be varied, meaning that there must be one fixed factor of production. Yet the long run refers to a period of time when all factor inputs can be varied, meaning that there must be no fixed factors, with the exception of technology (which takes notably longer to be varied). Also it is important to note that an average costs curve shows how much the average cost is at each given output (i.e. per unit that is produced). Therefore, a short run average cost (SRAC) curve shows the per-unit cost of output at different levels of production. This is illustrated in the following diagram: As is evident from this diagram, the SRAC curves have a U-shape. ...read more.

However, once more than five post-men are added to deliver mail in this neighborhood, there will not be enough houses in the neighborhood for each postman. Quite possibly they will then be assigned to only 16 or 17 houses each, which will not result in an increase of output since they can only deliver to 100 houses anyway. Also, this extra post-man that has been hired will need a salary, so as a result the average costs will rise. This is a clear example of diminishing marginal returns (DMR), since whenever successive equal amounts of a variable factor (the amount of post-men) are put to work with a fixed amount of other factors (the maximum rate at which they can deliver mail and the amount of houses in the neighborhood), there will come a point when the addition of total output becomes progressively smaller. Thus additional units of output become increasingly more expensive to produce, which means that average costs must be increasing, explaining why the short-run average cost (SRAC) ...read more.

Yet the long run refers to a period of time when all factor inputs can be varied, meaning that there must be no fixed factors, with the exception of technology (which takes notably longer to be varied). Therefore a LRAC curve is composed of several individual SRAC curves, which each depict the average costs of production when different amounts of input is used. The LRAC curve can be obtained by taking the lowest SRAC for each possible level of output, thus the LRAC shows the minimum level of average costs attainable at any given level of output. This can be illustrated in the following diagram: Therefore, it can be concluded that the SRAC and the LRAC curves are identical in shape. Yet the shape of the SRAC is a result of the effect of DMR on average costs and output of a product, and the shape of the LRAC (which consists of the lowest points from many individual SRAC curves) is a result of changing economies of scale and returns to scale. ...read more.