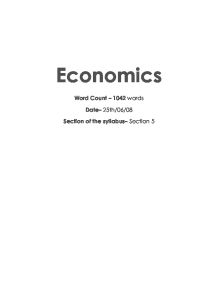 Economics Word Count - 1042 words Date- 25th/06/08 Section of the syllabus- Section 5 The article emphasizes on providing education to every eligible girl in sub-Saharan Africa and South Asia. It highlights that a girl who takes birth in South Asia or sub-Saharan Africa has to undergo desperate hardships such as poverty, disease, war or famine. Apart from that, she will also have to confront the disadvantage of being a girl. There is no culture, country and continent that are destitute of inequality. The root cause of girls not getting education is the cultural norms and economic hardships, which parents face. There is a norm of single-sex schooling in poor Muslim countries like Pakistan, Yemen, and Morocco and in the problem is that rural areas of those countries can afford only one public school that can be set for girls only. The inequality between girls and boys exist heavily in South Asia and Sub-Saharan Africa and almost all of those countries come under the category of 'Least Developed Countries' (LDCs). ...read more.

Uneducated women do not know the severe malnutrition and prenatal care during pregnancy which puts both the child and the mother at serious risk. Expenditure on human capital - better educated, health, and nutrition - tends to reduce birth-rates and infant mortality. The women will be educated and will be able to effectively take part in family planning as she will be aware of the consequences. Having a controlled population means a positive result in the GNP per capita which is the result of subtracting the population growth rate from the GNP growth rate. Educating the girls will privilege them to be able to raise their child effectively in a civilized manner. Educated women will be aware of dangers such as HIV/AIDS, poor sanitary habits and poor dietary habits. So basically they will be aware of the environment around them and above all they will know their rights and therefore fully stand up for themselves. So, educating the girls would not only benefit themselves but the society as a whole as well. ...read more.

When the girls of a country are educated they will definitely add to the country's work force and educating girls means educated women in the country which means that they will know how to properly raise their children and nurture them. There are many benefits which the country will have from providing education to the girl. There are short term benefits as well as long term benefits. More emphasis will be on the long term benefits as you know that it will take time before the women of the country will all be educated and it will take time to have an impact of providing education to girls on country's women literacy rate. I also found the idea proposed in the article by the policymakers about handing the money to the mother of the school-going girl, instead the men. Handing the money to the women is a very effective and well-thought idea as mothers are more concerned about their children's health and nutrition. ?? ?? ?? ?? Commentary: Make Educating Girls a Priority Commentary: Make Educating Girls a Priority The HEa ...read more.