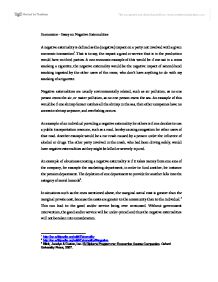 Economics - Essay on Negative Externalities A negative externality is defined as the (negative) impact on a party not involved with a given economic transaction1. That is to say, the impact a good or service that is in the production would have on third parties. A non economic example of this would be if one sat in a room smoking a cigarette, the negative externality would be the negative impact of second-hand smoking ingested by the other users of the room, who don't have anything to do with my smoking of a cigarette. Negative externalities are usually environmentally related, such as air pollution, as no one person owns the air, or water pollution, as no one person owns the sea. An example of this would be if one shrimp farmer catches all the shrimp in the sea, then other companies have no access to shrimp anymore, and overfishing occurs. An example of an individual providing a negative externality for others is if one decides to use a public transportation resource, such as a road, hereby causing congestion for other users of that road. Another example would be a car crash caused by a person under the influence of alcohol or drugs. ...read more.

money, and so they try to get around the bans and restrictions by looking for loopholes. Another problem with this solution is that it tends to lead to job losses, and the consumer not consuming the good that was originally made. The product may have been valuable, and thus this can cause problems in the economy. Also, the cost of setting and controlling standards may lead to greater costs than the cost of production. The final option is to issue 'tradable emission' permits. The government could issue 'tradable emission' permits to firms that are polluting. These are market-based solutions to negative externalities and external costs. Tradable emission permits are government-issued and give the firms licence to 'create' pollution, up to a certain degree or level. Once these permits have been issued, firms can buy, sell and trade these permits on the market. The government decides upon the level of pollution that it will permit every year, and then splits the total level between competing firms - rather like the allocation of scarce resources. The split pollution levels come out in the tradable permits, each allowing a certain level of pollution, which amounts to the country's total level. Thus, a firm has a proportion of emissions that it is allowed to produce. ...read more.

Clearly, this is not an effective way of reducing emissions. In conclusion, there is always a two-sided argument. The governments and firms face constant dilemmas, whether to spend more and dissatisfy the community, or spend less, reduce the emissions but decrease production, leading to a scarcity of resources. Unfortunately, the correct decisions aren't always made, and indeed are not always possible. In these cases, the government and firms will often use the theory of opportunity costs to outweigh the two options. Eventually though, one poorly made decision can usually be balanced by an external party's correct decision making, thus balancing out the problems. Although this leads to a stabilization of the reduction of emissions, it does not necessarily lead to the reduction of them, which is the government's ultimate aim. As I write, it is 2008, and many countries have not successfully reduced their emissions according to the Kyoto Protocol guidelines. This is often due to economic reasoning - one of the main reasons behind the United States not ratifying the treaty. So in the future, we will have to decide - do we continue polluting, or do we cut down on production and more efficiently allocate what we can produce? 1 http://en.wikipedia.org/wiki/Externality 2 http://en.wikipedia.org/wiki/Externality#Negative 3 Blink, Jocelyn & Dorton, Ian. IB Diploma Programme: Economics Course Companion. Oxford University Press, 2007. ?? ?? ?? ?? ...read more.