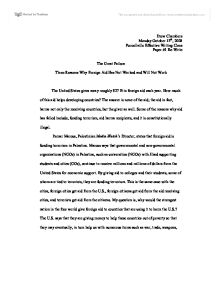 Drew Chambers Monday October 13th, 2008 Purcellville Effective Writing Class Paper #1 Re-Write The Great Failure Three Reasons Why Foreign Aid Has Not Worked and Will Not Work The United States gives away roughly $27 B in foreign aid each year. How much of this aid helps developing countries? The answer is none of the aid; the aid in fact, harms not only the receiving countries, but the giver as well. Some of the reasons why aid has failed include, funding terrorism, aid harms recipients, and it is constitutionally illegal. Itamar Marcus, Palestinian Media Watch's Director, states that foreign aid is funding terrorism in Palestine. Marcus says that governmental and non-governmental organizations (NGOs) in Palestine, such as universities (NGOs) with Jihad supporting students and cities (GOs), continue to receive millions and millions of dollars from the United States for economic support. By giving aid to colleges and their students, some of whom are tied to terrorists, they are funding terrorism. ...read more.

When the United States sends over shiploads of produce like corn, rice, and carrots, they harm much more than they help. Imagine you are a hard-working farmer growing and raising produce to sell in order to support your family. Now imagine gargantuan cargo ships floating into dock, carrying thousands of times more food than you have grown. They then distribute the food they have brought among the people of the country, for free. There is no longer a need to buy your food and as a result you are sent into deeper poverty and possibly death. In the 1950s and '60s the United States dumped massive amounts of wheat within the country of India causing widespread bankruptcy of farmers and disruption of India's agricultural market. As you can see the United States' intention to help, is actually harming. Where does the U.S.A., who is in $10 T of debt according to the national debt clock, find money for foreign aid? ...read more.

Benjamin Franklin once said that any country who gives up liberty for security is worthy of neither. I hope that is this little slice of the debate against foreign aid, has been able to show you that the US is doing exactly what Mr. Franklin said so long ago. By giving foreign aid in hope for security in alliance, weapons, and knowledge, we are losing the liberty our nation was built and designed upon. All in all, not only is foreign aid harmful to the recipients, but it is harmful to the giver, and harmful to the provider. The United States, whether blindly or knowingly, is destroying the hopes of growth of developing countries and, ultimately, destroying itself; If by sending buckets of food that farmers are sweating and bleeding to grow and sell, or funding wicked radicals waiting to blow nations out of the water, or by simply sending tax payers dollars to foreign countries, fracturing the law set down by the Founding Fathers so long ago. Why? ...read more.