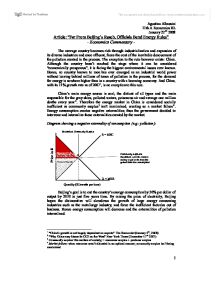 Article: "Far From Beijing's Reach, Officials Bend Energy Rules" - Economics Commentary - The average country becomes rich through industrialization and expansion of its diverse industries and once affluent, faces the cost of the inevitable denouement of the pollution created in the process. The exception to the rule however exists: China. Although the country hasn't reached the stage where it can be considered "economically prosperous", it is facing the biggest environmental issues ever known. Hence, no country known to men has ever emerged as an industrial world power without leaving behind millions of tones of pollution in the process, for the demand for energy is nowhere higher than in a country with a booming economy. And China, with its 11% growth rate as of 20071, is no exception to this rule. China's main energy source is coal; the dirtiest of all types and the main responsible for the gray skies, polluted waters, poisonous air and average one million deaths every year2. ...read more.

Moreover, the policy refrains small to medium-size factories from purchasing newer, more efficient machines that meet the new requirements as their revenues decrease with a price-increase. Hence, only the smaller companies are put out of business, raising unemployment, social unrest, instead of decreasing consumption. Likewise, the government has limited the amount of new coal-burning plants to decrease coal production and gain further lost welfare (see diagram above). However, the western provinces rely entirely on the local heavy industry (the most energy-consuming type of industry) as they lack most natural resources, with the exception of coal. Again, the limiting of such industries in these provinces is causing massive unemployment and tension between the local and Beijing governments; thus overall, the lost welfare of society is not fully regained by Beijing's policy (see diagram above). Furthermore, the raise in the price of electricity as a way to internalize the negative externality of pollution is, in fact creating itself new market failures, for example: black markets. ...read more.