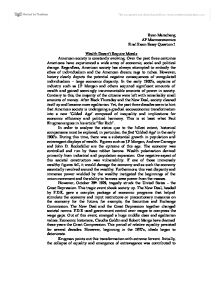 Ryan Marschang AP Macroeconomics Final Exam Essay Question 1 Wealth Doesn't Require Morals American society is constantly evolving. Over the past three centuries Americans have experienced a wide array of economic, social and political change. Regardless, American society has always attempted to embody the ethos of individualism and the American dream; rags to riches. However, history clearly depicts the potential negative consequences of unregulated individualism - large economic disparity. In the early 1900's, captains of industry such as J.P Morgan and others acquired significant amounts of wealth and gained seemingly insurmountable amounts of power in society. Contrary to this, the majority of the citizens were left with remarkably small amounts of money. After Black Thursday and the New Deal, society cleaned itself up and became more egalitarian. Yet, the past three decades seem to hint that American society is undergoing a gradual socioeconomic transformation into a new 'Gilded Age' composed of inequality and implications for economic efficiency and political harmony. ...read more.

Krugman points out this transformation with extreme fervent. Initially, the collapse of equality and emergence of extravagance was contributed to three main theories. Firstly, the globalization hypothesis, which argued that the changing income distribution was due to the growth of world trade and growing imports of manufactured goods. Secondly, the "skill-biased technological change" theory, argues that the cause of growing inequality is grounded in domestic innovation, the increase demand for highly skilled and educated workers. Finally, the "superstar" theory, debates that modern technological change in communication has turned competition into a tournament in which the winner wins hugely and the others are rewarded to a small extent. However, according to Krugman, these three theories do not suffice in explaining the current level of inequality. For example, there has been a 2,500 % increase in CEO incomes and these theories cannot justify such statistics. Instead, Krugman attributes it all to a significant shift in social norms. The status quo is quite surprising. ...read more.

For example, he looks at corporate executives pay and the fact that some CEO's are not paid for their performance but merely charisma and billboard qualities. Moreover, all of this is much more camouflaged that ever before and this to an extent pulls the wool over many citizens' eyes. This practice diverts resources away from productive uses and is inefficient. In conclusion, the facts and theories are on the table. The American ethos of individualism has emerged stronger and disparity is back. Is it just a matter of time before the repeal of the estate tax passes and vast amounts of wealth are allowed to be passed down and permanent classes will exist? The wealthy have found clever ways to by pass the present restrictions and so evidently new regulations must be enforced in order to devolve. Furthermore, the Unions and special interest groups organized against the rich must unite in order to join powers to attempt to counteract the influence of the rich. However, in the end, perhaps something will come along that will shake up society to the extent of the Great Depression and our resilient democracy will be saved from plutocracy. ...read more.