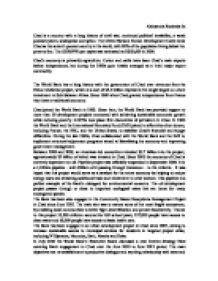 Chad is a country with a long history of civil war, continued political instability, a weak judicial system, widespread corruption.

Aleksandra Rosiczka 2a Chad is a country with a long history of civil war, continued political instability, a weak judicial system, widespread corruption. The United Nations Human Development Index ranks Chad as the seventh poorest country in the world, with 80% of the population living below the poverty line. The GDP(PPP) per capita was estimated as US$1,600 in 2008. Chad's economy is primarily agriculture. Cotton and cattle have been Chad's main exports before independence, but during the 1990s gum Arabic emerged as a third major export commodity. The World Bank has a long history with the government of Chad over revenues from the Exxon Mobil-led project, which at a cost of $4.2 billion represents the single largest on-shore investment in Sub-Saharan Africa. Since 1960 when Chad granted independence from France they have a traditional economy. Chad joined the World Bank in 1963. Since then, the World Bank has provided support to more than 50 development projects connected with achieving sustainable economic growth while reducing poverty. ...read more.

The oil development project passes through or close to important ecological areas that are home for many endangered species. The Bank has been also engaged in the Community Based Ecosystems Management Project in Chad since June 2005. The main aim was to restore some of the most fragile ecosystems, by enabling local communities to better fight desertification and protect biodiversity. Thanks to this project 35,500 children secured for full school years, 257,000 people have access to clean water and 65,000 people have access to basic health care. The Bank has been engaged in an urban development project in Chad since 2007, aiming to increase sustainable access to municipal services for residents in targeted project cities, including N'Djamena, Moundou, Sarh, Abeche and Doba. In July 2010 the World Bank's Executive Board discussed a new Interim Strategy Note covering Bank engagement in Chad over the June 2010 to June 2012 period. The main objectives are re-establishment a productive dialogue and working relationship with state and non- state actors. ...read more.

Life has gone from bad to worse for most people. According to UNICEF, child mortality rose from 1990 to 2006. Only one adult in four is literate, and 37 percent of children are underweight. Ian Gary, an Oxfam America specialist in managing mineral resources said: "The World Bank made a gamble," "It knew the situation in Chad going in, but it argued it could build the capacity of the Chadian government and the governance situation would improve alongside the oil boom. But what we have seen in Chad and in so many other places, it is that boom and that flow of revenue that undermines governance rather than improving it." Moreover, the World Bank and the Chad authorities agreed to strengthen the Coll�ge de Controle et Surveillance des Revenues P�troli�res - an independent body with oversight of the use of oil revenues for poverty reduction - by ensuring it has the resources to more effectively perform its duties. Without the World Bank this projects would never have happened. ...read more.