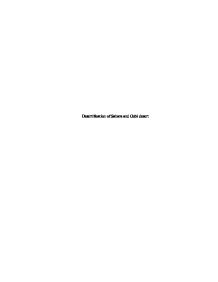 Desertification of Sahara and Gobi desert

Desertification of Sahara and Gobi desert The planet Earth has many ecological problems, from small ones to very severe; some of them are not caused by humans although the biggest part of the ecological problems is created by human activity. It seems very illogical that we destroy our mother Earth the planet which is one and only home to us. We pollute the air we breathe, the water we drink and what is more we destroy animal habitat and also our habitat, the earth on which we build our houses. Destruction of the soil by human activity leads to many severe problems from degradation of the soil from farming, trough destruction from heavy machines used in agriculture to the soil erosion itself. Soil erosion can cause many problems and has a very bad influence on a fertility of the soil; it also causes a very severe problem which is desertification. Desertification is a huge problem in the areas around the deserts it destroys the habitat of people and animals and creates a new group of refugees, so called environmental refugees. Desertification is a consequence of unwise usage of the land in semi- arid and arid areas, it is created manly by humans and we have to fight it because it destroys the land, habitat and cultures. Desert and Desertification "Desert, arid region, usually partly covered by sand, having scanty vegetation or sometimes almost none, and capable of supporting only a limited and specially adapted animal population. The so-called cold deserts, caused by extreme cold and often covered with perpetual snow or ice, are quite distinct from the deserts of warm regions; cold deserts cover about one sixth of the world's surface. ...read more.

"It has occupied an important cultural and economic role in both of these nations for thousands of years, and it is also a popular tourist destination. The Gobi Desert is characterized by harsh conditions and temperature extremes which can push most living organisms to their limits. Despite this, nomadic herders call the Gobi Desert home, and there are human outposts in many far flung regions of the Gobi. Although most people associate sand with deserts, the Gobi is not actually very sandy. Much of it consists of rock outcrops, gravel, and dirt, with scattered shrubs in some regions, especially those near the Kerulen River, which provides some water to parts of the Gobi Desert." (Smith, 2010) The Gobi desert is very interesting and beautiful place on the Earth with very valuable historical and cultural heritage because of the mixture of two nations and the location on the oldest continent. "The total area of the Gobi Desert is around 500,000 square miles (1,295,000 kilometers), making it one of the largest desert regions in the world, after the Sahara. The Eastern region of the Gobi Desert has been used by nomadic herders for thousands of years, and some ecologists have grown concerned about the ecological stability of this region due to overgrazing and exploitation. Another region, the Bayanhongor, has a rich archaeological record of dinosaur fossils, along with a small population of rugged animals and plants." Although Gobi desert is very dry region it has a small population of plant and animals which makes it a specific and very precious place on the Earth. The most remarkable plants of the Gobi desert are the saxaul tree which can be found in the form of the small shrub or a small tree, it has small yellow flowers. ...read more.

If this will happen the Great Green Wall of China could become a wonderful project and will preserve these valuable locations and improve also the air conditions in China. However it is more a dream than the reality because China�s government hasn't change for ages. Beijing during the sand storm, and during the normal air conditions. Desertification is a complex problem of overgrazing, soil erosion, and wind erosion, overpopulation of the semi- arid and arid areas on the Earth. However desert is very inhabitable place it hides many of beautiful and unique elements from oases through plants which are able to survive in very severe conditions with only a few centimeters of rain falls per year to people and animals who live in precious symbiosis. Preservation of the Sahel area and areas around the Gobi desert is very important from cultural point of view as well as from ecologic. The Sahel region cannot be destroyed and became a part of Sahara there are people who want to survive there are plants which need to be preserved because we will lose them forever the animals which will extinct. The same is true for the Gobi and Gobi is maybe more special than the Sahara, because it is a real home to nomads who have lived there ever since and have no place else to live. They are environmental refugees and call for help, they cannot help ourselves because they are not educated to do so. They need a help from the government as well as animals and plants, they need to stop desertification and not to be removed from their natural habitat somewhere else. They already know that they cannot exhaust the land that much and cannot overgraze the grass because it is also a building material for them, they know the value of those basic things they need. ...read more.