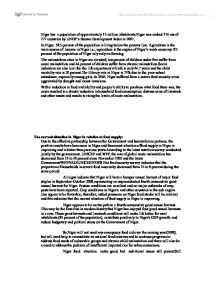 Niger has a population of approximately 13 million inhabitants.Niger was ranked 174 out of 177 countries by UNDP's Human Development Index in 2007. In Niger, 59.5 percent of the population is living below the poverty line. Agriculture is the main source of income in Niger i.e., agriculture is the engine of Niger's weak economy. 82 percent of the population of Niger rely only on farming. The malnutrition rates in Niger are elevated; ten percent of children under five suffer from acute malnutrition and 44 percent of children suffer from chronic malnutrition.Social indicators are also low like the life expectancy at birth is only 44.7 years and the child mortality rate is 20 percent.Thr illitracy rate in Niger is 71% due to the poor school attendance, especially among girls. In 2005, Niger suffered from a severe food security crisis aggravated by drought and locust invasions. With a reduction in food availability and people's ability to purchase what food there was, the crisis resulted in a drastic reduction in household food consumption, distress sales of livestock and other assets and results in rising the levels of acute malnutrition . The current situation in Niger in relation to food supply: Due to the effective partnership between the Government and humanitarian partners, the positive results have been seen in Niger and thecurrent situation offood supply in Niger is improving and is better than previous years.According to the latest nutrition survey conducted jointly by the government, UNICEF and WFP, the rate of global acute malnutrition has decreased from 15 to 10 percent since November 2005 and the latest Government/WFP/FAO/UNICEF/FEWS-Net food security survey indicates that the proportion of households in severe food insecurity decreased from 15 to 9 percent during the same period. All signs indicate that Niger will have a bumper annual harvest of major food staples in September-October 2008,representing an unprecedented fourth consecutive good annual harvest for Niger. ...read more.

CARE International has run more than 50 projects in Niger over the last 30 years and has a long history of helping the people of this country make their lives more secure. ARE International's programmes focus on livelihood security, strengthening civil society organization, governance, gender, health, HIV/AIDS and micro-finance. CARE Niger has solid experience in conflict resolution and community mobilization around water, food security and natural resources management. CARE International's vision in Niger is to create a new spirit of development, working in partnership with families and communities. CARE International is currently conducting 15 projects in all seven regions (Tillaberi, Dosso, Tahoua, Agadez, Maradi, Diffa and Zinder) of the country and focuses on protecting households' assets to increase their capacities to face shocks and food insecurity. There is also a focus on gender and diversity, developing partnerships with other groups, such as community business organisations and charities, and preparing to respond to emergencies. AIDS Prevention - Phase III (Pr�vention du SIDA) The project goal is to reduce the contribution of migration to the spread of HIV infection. Due to seasonal patterns of migration from rural areas to urban centers, often on the West African coast, migrants are among the most vulnerable to infection and are often the main means of transmission in Niger. CARE has been involved with combating the spread of AIDS in Niger since 1993, and this project builds on work that CARE did in the AIDS and Migration project/SIDA en Exode which provided information about AIDS and made progress in changing attitudes that contribute to transmitting HIV. This project targets communities situated along the main migratory route between Tahoua (the area that provide the largest number of Niger's migrants) and Abidjan (their main destination). CARE works with high-risk groups, including the wives of migrants who remain in their home villages, commercial sex workers and the predominantly young male migrants. Key activities include education and information services, greater access to condoms, enhanced capacity to diagnose and treat sexually transmitted infections, and social support for high-risk groups. ...read more.

and Eleveurs Sans Fronti�res (ESF Dangol). CARE, AREN, and ESF Dangol work in consultation with the technical services of the Ministry of Animal Resources (MRA) and the Ministry of Social Development (MSD), both of whom already support producers in the livestock sector. This partnership approach and capacity strengthening strategy for partners enable the project to achieve its objective of contributing to the reduction of poverty of the targeted beneficiaries. Wfp The first objective of the rotracted Relief and Rehabilitation Operation (PRRO) addresses the most critical aspect of underdevelopment in Niger, child malnutrition. Through the PRRO, WFP provides supplementary feeding rations for moderately malnourished children and 'blanket' supplementary feeding, in collaboration with UNICEF, to all children from 0-3 years old in the most vulnerable areas of the country to cover the most critical moments of the lean season. WFP is also working with nutritional partners to support to malnourished pregnant and lactating women. In addition to nutrition activities, the PRRO includes food for training aimed at improving the self-help capacities and development planning of village communities and village cereal banks planned to help reduce the risk of excessive price fluctuations in regions with poor access to the private markets. On average the CP targets about 400,000 beneficiaries per year with 14,00 metric tonnes of food aid. In order to improve the Government's capacity to monitor food security, WFP together with other partners provide technical support to the National Early Warning System of the Nation Food Security Mechanism. Activities include regular monitoring support of the food security situation, joint assessments and joint evaluation missions. UNICEFPrimary education for 150,000 children (Total project amount-$2,245,421 for 2008 - 2009) WHO T he first round of this year's Immunization Plus Days (NIPDs) held in all the states of the country and the Federal Capital Territory (FCT) from January 31 - February 3, 2009. The round provided an opportunity for the respective Task Forces on Immunization (TFIs) in the endemic states where they have been inaugurated, to consolidate their roles in efforts to ensure the interruption of the transmission of the wild ...read more.