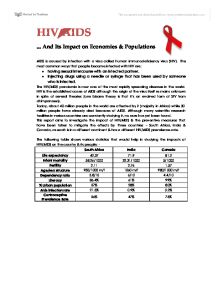 HIV/AIDS ... And Its Impact on Economies & Populations AIDS is caused by infection with a virus called human immunodeficiency virus (HIV). The most common ways that people become infected with HIV are: * having sexual intercourse with an infected partner. * Injecting drugs using a needle or syringe that has been used by someone who is infected. The HIV/AIDS pandemic is now one of the most rapidly spreading diseases in the world. HIV is the established cause of AIDS although the origin of the virus itself remains unknown in spite of several theories (one bizarre theory is that it's an evolved form of SIV from chimpanzees). Today, about 40 million people in the world are affected by it (majority in Africa) while 30 million people have already died because of AIDS. Although many scientific research facilities in various countries are constantly studying it, no cure has yet been found. This report aims to investigate the impact of HIV/AIDS & the preventive measures that have been taken to mitigate the effects by three countries - South Africa, India & Canada, as each is in a different continent & has a different HIV/AIDS prevalence rate. The following table shows various statistics that would help in studying the impacts of HIV/AIDS on the country & its people: - South Africa India Canada Life expectancy 42.37 71.9 81.2 Infant mortality 58.26/1000 32.31/1000 5/1000 Fertility 2.11 2.76 1.57 Age/sex structure 950/1000 m/f 1060 m/f 980/1000 m/f Dependency ratio 5.8/10 6/10 4.4/10 Literacy 86.4% 61% 99% % Urban population 57% 28% ...read more.

According to recent studies, only 60% of children aged 10-14 who lost both parents attended school, compared to 77% of those with both parents still alive. India Since the majority of the HIV/AIDS victims are truck drivers & sex workers, there is a comparatively higher correlation between poverty, literacy & prevalence of HIV/AIDS. For people already living in poverty, further income loss can threaten their ability to meet basic needs such as food. As child labour has since long been a problem in India, HIV/AIDS only pushes it further, undoing all the recent work of NGOs & govt policies against child labour. The same phenomena as mentioned above is taking place in India, where children in rural areas as well as poor urban areas drop out of school & take up full time jobs to support their family. Canada Since HIV/AIDS is transmitted mainly through drug users, & most of them are youngsters, there is no 'gap' in generations created. Healthcare is insured by the govt itself & hence is free or rather cheap to all. On an overall basis, there is no change in family structure. 4] Socio-cultural impacts, discrimination & stigma South Africa HIV, in South Africa, is considered a disease of the poor; a mild correlation exists between extreme poverty & high HIV prevalence, although HIV is prevalent across all sectors of society. Coming out as HIV-positive can have a negative effect on employment & housing opportunities, as well as social relationships. ...read more.

Various social factors make it difficult to carry out effective HIV prevention campaigns in South Africa, as the population is highly diverse & divided by deeply rooted social inequalities. South Africans have a mixture of ethnic backgrounds. There are 11 official languages & many dialects; around 86% of the population is literate. Some live in large, crowded cities, while others live in sparsely populated rural areas, many of which are isolated, underdeveloped & lacking infrastructure. This diversity has made it very difficult to carry out AIDS awareness campaigns that actually influence people's behaviour. Conclusion The three countries investigated had varying reactions to the epidemic as each of them were affected at a different scale & the development of the country & its progress also mattered in how effective the impact was. South Africa is struggling with its campaigns and is in desperate need for international aid while India is much better off localizing & delegating its campaigns to individual states rather than taking up a nation-wide mass media approach in order to respond effectively to each area's beliefs & social taboos. Canada, the best off out of all three, is doing really well as it doesn't have to bother much but yet take care and try to reduce the prevalence of HIV/AIDS in the country. Credits www.who.int www.avert.org www.cia.gov - The World Factbook www.nationmaster.com www.un.org - Ecosoc division www.southafrica.info - HIV/AIDS in South Africa www.wikipedia.com The POLICY Project - The Economic Impact of AIDS The Washington Quarterly - India at the Crossroads: Battling the HIV/AIDS Pandemic Collaborated with Gayatri Bhatia & Amandip Singh. ...read more.