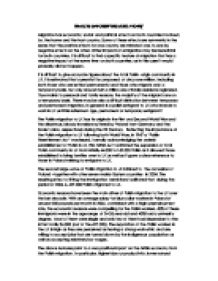 Impact of Polish migration to the UK

IMPACTS OF POLISH MIGRATION TO UK Migration has economic, social and political effects on both countries involved, i.e. the home and the host country. Some of these effects are symmetric in the sense that the positive effects for one country are mirrored one-to-one by negative effects on the other. Other impacts of emigration may be beneficial for both countries. It is difficult to find a specific feature of migration that has a negative impact at the same time on both countries, as in this case it would probably did not happen. It is difficult to give accurate figures about the total Polish-origin community in UK. It is estimated that currently it is composed of circa one million, including both those who are settled permanently and those who migrate only a temporary basis. But only around half a million are officially residents registered. Due mainly to personal and family reasons, the majority of the migrants are on a temporary basis. There may be also a difficult distinction between temporary and permanent migration, in general: is a polish emigrant to UK who intends to work in UK until his retirement age, permanent or temporary emigrant? ...read more.

60% of these immigrants were in the age range of 24-35 year old and 40% had a university degree. Most of them were single and only few of them had dependants -the latter totally 36.000 (out of the 427.000). The reputation of the Polish workers in the UK is high as they are perceived as having a strong work ethic and are willing to accept jobs that are turned down by the indigenous population as well as accepting relatively low wages. The above features point to a very positive impact on the British economy from the Polish migration. In particular, higher labour productivity, lower natural unemployment rate and lower labour costs. At the same time however, those features bring almost exactly the opposite negative effects on the Polish economy. Those, while in the short term Polish migration could be a relief for the Polish society if they are unemployed, in the long term the effect may well be negative. Nevertheless, there are also positive effects from the Polish migration on the Polish economy and society. The most quantifiable one is related to salary remittances: it is estimated that 60% of the Polish workers send some or all of their savings to Poland, totaling around 4 billion pounds per year. ...read more.

According to official statistics, from an average British unemployment rate of 7.9%, only 5% of Eastern immigrants are unemployed while, e.g. another very important group of immigrants, namely India, Pakistan and Bangladesh, suffer a rate of 12%. In spite of the overall positive perception of Britons towards Polish immigrants, some sources of anti-Polish sentiment are present, as the far right British National Party who have being campaigning for the banning of Polish immigration and advocating to withdrawing their residence permission and sending them back to Poland. In the long term, potentially, migration has a negative effect for the home country and a positive effect on the host country given its impact on the average population age and its related consequences on dependency ratio. This is the case in Poland. Since the last Census in the year 2002, which recorded a population of 38.231.000 residents -of which 94.7% were Polish-, the population has been stagnant or slightly decreasing. Poland had reached a population of 38 million already in 1990. These facts, together with a low birth rate, highlight a negative dimension of the Polish emigration, including to UK. Overall, however, I tend to conclude that the Polish emigration to UK has been so far beneficial for both UK and Poland. ...read more.

An excellent overview of some of the issues relating to Polish migration to the UK. However, at times it lacks detail such as exploration of the social impacts of this migration. The essay makes good use of data to back up points of discussion.