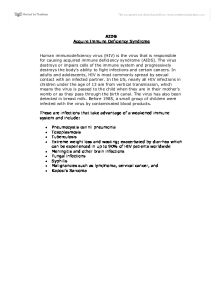 AIDS Acquire Immune Deficiency Syndrome Human immunodeficiency virus (HIV) is the virus that is responsible for causing acquired immune deficiency syndrome (AIDS). The virus destroys or impairs cells of the immune system and progressively destroys the body's ability to fight infections and certain cancers. In adults and adolescents, HIV is most commonly spread by sexual contact with an infected partner. In the US, nearly all HIV infections in children under the age of 13 are from vertical transmission, which means the virus is passed to the child when they are in their mother's womb or as they pass through the birth canal. The virus has also been detected in breast milk. Before 1985, a small group of children were infected with the virus by contaminated blood products. These are infections that take advantage of a weakened immune system and include: * Pneumocystis carinii pneumonia * Toxoplasmosis * Tuberculosis * Extreme weight loss and wasting; exacerbated by diarrhea which can be experienced in up to 90% of HIV patients worldwide * Meningitis and other brain infections * Fungal infections * Syphilis * Malignancies such as lymphoma, cervical cancer, and * Kaposi's Sarcoma The total number of people diagnosed with AIDS in the USA is fast approaching one million. This total increases by more than 40,000 each year. Around 47% of all people diagnosed with AIDS were probably infected with HIV through male-to-male sexual contact, while people exposed through heterosexual contact comprise around 17% of the total. ...read more.

Company costs for health-care, funeral benefits and pension fund commitments are likely to rise as the number of people taking early retirement or dying increases. Also, as the impact of the epidemic on households grows more severe, market demand for products and services can fall. The epidemic hits productivity through increased absenteeism. Comparative studies of East African businesses have shown that absenteeism can account for as much as 25-54% of company costs.30 A study in several southern African countries has estimated that the combined impact of AIDS-related absenteeism, productivity declines, health-care expenditures, and recruitment and training expenses could cut profits by at least 6-8%.31 Another recent study of a thousand companies in Southern Africa found that 9% had suffered a significant negative impact due to AIDS. In areas that have been hit hardest by the epidemic, it found that up to 40% of companies reported that HIV and AIDS were having a negative effect on profits. Despite this, only 13% of the companies surveyed with fewer than 100 workers had a company policy in place to deal with HIV and AIDS. Example: Some companies, though, have implemented successful programs to deal with the epidemic. An example is the gold-mining industry in South Africa. The gold mines attract thousands of workers, often from poor and remote regions. Most live in hostels, separated from their families; as a result a thriving sex industry operates around many mines and HIV is common. ...read more.

of the epidemic.27 When a teacher falls ill, the class may be taken on by another teacher, may be combined with another class, or may be left untaught. Even when there is a sufficient supply of teachers to replace losses, there can be a significant impact on the students. This is particularly concerning given the important role that teachers can play in the fight against AIDS. The Impact on Life Expectancy In many countries of sub-Saharan Africa, AIDS is erasing decades of progress in extending life expectancy. A recent study found that the average life expectancy of individuals living in sub-Saharan Africa has fallen by five years since the early 1990s, mainly because of AIDS.35 In Swaziland it has been estimated that life expectancy at birth, which is currently just 33, would be 66 without AIDS.36 37 The impact that AIDS has had on average life expectancy is partly attributed to child mortality, as increasing numbers of babies are born with HIV infections acquired from their mothers. The biggest increase in deaths, however, has been among adults aged between 20 and 49 years. This group now accounts for 60% of all deaths in sub-Saharan Africa, compared to 20% between 1985 and 1990, when the epidemic was in its early stages.38 By affecting this age group so heavily, AIDS is hitting adults in their most economically productive years and removing the very people who could be responding to the crisis. ...read more.