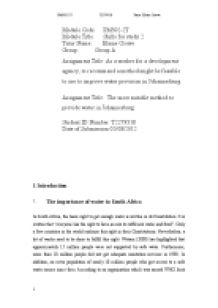 Investigating the most suitable method to provide water in Johannesburg

﻿PM502-2T T2279518 Tutor: Elaine Crowe Module Code: PM502-2T Module Title: Skills for study 2 Tutor Name: Elaine Crowe Group: Group A Assignment Title: As a worker for a development agency, to recommend a method might be feasible to use to improve water provision in Johannesburg Assignment Title: The most suitable method to provide water in Johannesburg Student ID Number: T2279518 Date of Submission:02/08/2012 1 Introduction 1. The importance of water to South Africa In South Africa, the basic right to get enough water is written in its Constitution. It is written that ?everyone has the right to have access to sufficient water and food?. Only a few countries in the world enshrine this right in their Constitutions. Nevertheless, a lot of works need to be done to fulfill this right. Watson (2008) has highlighted that approximately 15 million people were not supported by safe water. Furthermore, more than 20 million people did not get adequate sanitation services in 1990. In addition, an extra population of nearly 10 million people who got access to a safe water source since then. According to an organization which was named WHO Joint Monitoring Program for Sanitation and Water Supply, the share of the people who had ...read more.

The west and north of Johannesburg has rolling hills while the eastern part is flatter. 2.3 Annual rainfall The bar chart illustrates the annual precipitation in Johannesburg. According to this graph, the main rain seasons are from December to April. During this period, Johannesburg will have an abundant rainfall. In addition, January is the month which has the largest rainfall during the whole year. Furthermore, the average of rainfall during these five months reaches about 90mm. However, during May to November only have a little rainfall, so Johannesburg will have a long period of arid time. The average of rainfall during this period is below 10mm per month and it is only one ninth compared with rainy seasons. 2.4 Water Pollution The water provision in Johannesburg is increasingly under pressure. Furthermore, eutrophication is a very serious issue. The water flows out from mining areas especially from gold mining is rapidly deteriorating and been acidic water (Itano, 2002). 3 The presentation of options 3.1 Large dams Building large dams is a traditional method to solve the water provision issue. They are usually been built above rivers, and water is distributed by underground water pipelines or artificial cannels. ...read more.

Many people thought that the recycled water was made from sewage water still contain some dangerous substances. This would harm their health and cause illness. 6 Recommendations Comparing the two methods, big dams seems cost a lot of money and also they will cause a very serious environment impact. In contrast, wastewater recycling costs less than big dams and it is more environmental-friendly. So wastewater recycling is more suitable for Johannesburg. 7 Conclusion To sum up, in order to find a suitable method to provide water in Johannesburg, two methods have been introduced. Both of the two methods might be feasible to adopt in Johannesburg and both methods have its own advantages and disadvantages. However, environment impact may be the most important factor which needs to be seriously considered. So the most suitable method is wastewater recycling in Johannesburg. Because it is a more environmental-friendly method. (1403 words) Reference: David,W. (2011). Water supply and sanitation in South Africa. Retrieved July 31, 2012, from www.johannesburg-direct.com/activity/visit-museum-africa Itano,.N. (2002). For Many Women, Clean Water Means Safety, Freedom. Retrieved July 31, 2012, from www.womensenews.org/story/international-policyunited-nations/020906/many-women-clean-water-means-safety-freedom Jose,B. (2012). Johannesburg. Retrieved July 31, 2012, from www.joburg.org.za/index.php?option=com_content&view=article&id=7343&catid=73&Itemid=114 Watson,S. (2008). Geography of Johannesburg. Retrieved July 31, 2012, from www.easyexpat.com/en/johannesburg/overview/geography.htm ...read more.