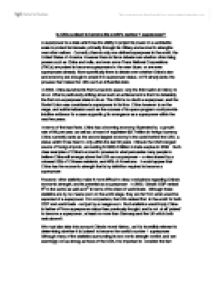 Is China poised to become the world's number 1 superpower?

Is China poised to become the world's number 1 superpower? A superpower is a state which has the ability to project its power on a worldwide scale to protect its interests, primarily through its military and economic strengths over other nations. Currently there is only one defined superpower in the world; the United States of America. However there is fierce debate over whether other rising powers such as China and India, and even some Trans National Corporations (TNCs) are poised to become superpowers in the near future, or are even superpowers already. More specifically there is debate over whether China's size and economy are enough to propel it to superpower status, or if it simply lacks the prowess that makes the USA such an influential state. In 2003, China launched its first human into space; only the third nation in history to do so. What is particularly striking about such an achievement is that it is debatably the first non-superpower state to do so. The USA is no doubt a superpower, and the Soviet Union was considered a superpower in its time. China however is on the verge, and subtle indicators such as the success of its space program could provide intuitive evidence for a case supporting its emergence as a superpower within the next few years. ...read more.

However there is uncertainty whether China's current growth rates can be sustained to see through its emergence as a superpower. China lacks a central banking system which may stunt future growth, as well as concerns over fulfilling its growing energy demands (its future energy requirements may be costly and stunt economic growth even further). An increase in general living standards brought about due to China's economic growth may also result in a growing dependant age cohort, as those born during Mao's booming reign age and become a burden on the economy, as they are no longer in the working age bracket. On the contrary, an ageing population failed to stop the USA from maintaining its superpower status, so it is still a probability that China will still be able to overtake the USA in this regard. Pranab Bardhan of Yale University believes that China's structural and institutional issues will 'hobble' it for years to come, preventing it from becoming the world's number 1 superpower. Over half the population earns under $2 a day according to the World Bank; it must be remembered that although China's economy has expanded by leaps and bounds over the last few decades, its wealth must be shared by a huge population of 1.3 billion and rising. ...read more.

Its economy has been rapidly expanding in the last few decades at rates never seen before, which would indicate it is poised to become a superpower, despite some questionability regarding the sustainability of such growth. Politically China is sound, and has good relations with both western and neighbouring states. Both these factors allow China to make the utmost utility out of its 'soft power', something which the USA does with such finesse. Militarily however, China is lacking the substance of superpowers; it simply lacks the ability to deploy troops anywhere in the world to enforce the governments' will. This may evoke doubt that it will overtake the USA as the world's leading power. However the USA's financial system shows signs of weakness, and there is growing discomfort amongst its people, manifested by the recent 'Occupy Wall Street' protests. The USA is particularly prone to economic downturns, which China can cope with well due to its low labour costs and lack of consumerism on a large scale (although growing). If the USA's economy weakens in the event of another recession or economic downturn, and if China's current growth rates are sustained, it is entirely possible that China may overtake it as a world power; however there is still much to be done in regards to China's military strength, and the fact much of its population still lives below the poverty line. ?? ?? ?? ?? ...read more.