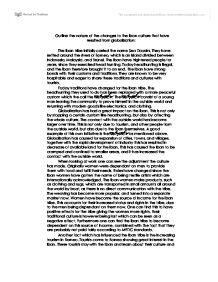 Outline the nature of the changes to the Iban culture that have resulted from globalization: The Iban tribe initially carried the name Sea Dayaks. They have settled around the rivers of Borneo,

Outline the nature of the changes to the Iban culture that have resulted from globalization: The Iban tribe initially carried the name Sea Dayaks. They have settled around the rivers of Borneo, which is an island divided between Indonesia, Malaysia, and Brunei. The Iban have frightened people for years, since they exercised head hunting. Today headhunting is illegal, and the Iban therefore brought it to an end. The Iban have strong bonds with their customs and traditions. They are known to be very hospitable and eager to share these traditions and cultures with tourists. Today traditions have changed for the Iban tribe. The headhunting they used to do has been replaced with a more peaceful custom which the call the berjelai. The berjelai consist of a young man leaving the community to prove himself in the outside world and returning with modern goods like electronics, and clothing. Globalization has had a great impact on the Iban. ...read more.

The weaving has become more popular, and turned into a separate market now. Women have become the source of income for the Iban tribe. This accounts for their increased status and rights in the tribe, due to the men being dependant on them now. One can find this to have positive effects for the tribe giving the women more rights, their traditional culture is however being lost which can be seen as a negative effect. Furthermore one can find the Iban tribe to become dependent on this source of income, combined with the fact that they are probably not paid fairly according to MEDC standards. Another fact which has influenced the Iban tribe is the increasing tourism in Borneo. Tourists come to Borneo showing great interest in the Iban. These tourists stay with the Iban and learn about their culture and traditions. The tourists do not only learn from the Iban, but the Iban also learn from the tourists. ...read more.

Moving deeper into the jungle would cause for the Iban to become more traditional, making the men go out and hunt and collect food for the tribe whereas with their more modern lifestyle they could easier get to food in a nearby village. The Iban where extremely dependant on the logging, and once the jobs disappeared change had to be made. The logging industry has grown and together with other industry it has caused for greater pollution. People get sick, and trees where the Iban get their medicine from die. The Iban tribe has been severely affected by globalization. They are no longer known for their old tradition of headhunting, but for their new traditions, or their weaving art. The Iban have become part of the international market. Their culture, and traditions have changed and their knowledge on the world around them has increased significantly. One can find that most changes the Iban has gone thru have happened due to globalisation. The Iban their original lifestyle has changed completely, due to the effect of the world around them. ?? ?? ?? ?? ...read more.