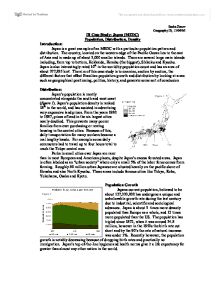 Sasha Zouev Geography IB, 13/09/05 IB Case Study: Japan (MEDC) Population, Distribution, Density Introduction: Japan is a great example of an MEDC with a particular population pattern and distribution. The country, located on the western edge of the Pacific Ocean lies to the east of Asia and is made up of about 3,000 smaller islands. There are several large main islands including, from top to bottom, Hokkaido, Honshu (the biggest), Shikoku and Kyushu. Japan is also interestingly rated 10th in the world by population count and has an area of about 377,835 km�. The aim of this case study is to examine, section by section, the different factors that affect Brazilian population growth and distribution by looking at areas such as geographical positioning, politics, history, and generate some sort of conclusion Distribution: Japan's population is mostly concentrated alongside the south and west coast (figure 1). Japan's population density is ranked 18th in the world, and has assisted in advertising very expensive land prices. From the years 1980 to 1987, prices of land in the six largest cities nearly doubled. ...read more.

A great part of Japan is in fact covered in mountains, roughly 73%. Japan is also known for its long coastline that is very densely populated especially in the South. This is an exceptionally convoluted coastline in comparison to the land area. Settlements have emerged all along the coastline and it has historically always been a strong trading route and post. With regards to climate, the Japanese climate is generally rainy and has high humidity. Also Japan is situated on a conjunction of several tectonic plates, making it strange how so many Japanese live with an earthquake risk. Economics/Infrastructure: Japan is often ridiculed because of how few Japanese farmers and farms there are. They tend to rely heavily on imports and other countries. However Japan is nonetheless a rich and powerful nation. Many of the millions of citizens have found jobs in the thriving technology sector. Also with the development of more so called "Science-Cities", Japan is continuously finding jobs for the workers. Population Problem: Japan's main problem with regards to population is the fact that it is facing an increasingly aging population like many other industrialized countries. ...read more.

Nowadays, legal immigration has become restricted to skilled workers and so most of the immigrants are skilled professional people employed by large corporations. However it must also be said that around 200,000 illegal foreigners can be found in Japan, most of whom are Chinese. There remains a slight confusion and concern over the future of immigration policies. Unskilled labor is in need of a boost in Japan, explaining why so many Japanese work abroad. In conclusion, Japan's labor shortage, mixed with the ageing population, could stir up a serious problem for taxpayers, authorities and the government. Also, immigration is not publicly popular as recent increased crime rates are often attributed to foreigners living in Japan. Future Growth?: Japan could be facing a very serious problem if it does not do anything further about its aging population. The price for having too many elderly unemployed pensioners is a hefty one. One projection shows just how many 65 and older citizens there might be in the year 2050 (figure 6). Major cities, like Tokyo, will always remain attractive to the young adult seeking a successful life. However unless the population problem is solved, that dream will never become reality for many. Sources: http://en.wikipedia.org/wiki/Demographics_of_Japan http://geography.about.com/gi/dynamic/offsite.htm?site=http://lcweb2.loc.gov/frd/cs/jptoc.html www.altavista.com Geography Book, page 71 ...read more.

An excellent over view of Japan's population and the problems they face in the future. Great use of data and good inclusion of diagrams, though reference needs to be made to these in the text.
5 stars.