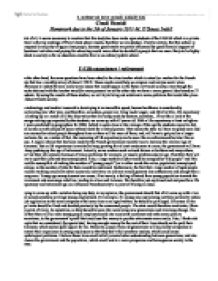 Population changes in France. The effects of rising life expectancy and immigration.

Cultural life plan analysis Chadi Hamidi Homework due to the 5th of January 2011-M. D'Souza 2nde2 First of all, it seems necessary to mention that this study has been made upon students of the EABJM which is a private school in the top rankings of Paris's best school results, therefore we can deduce, if not be certain, that this school is composed in majority of upper class people, because good results are partly influenced by good financial support of educational activities and paying for schooling would more often be decided by people that are more likely to be highly ranked in society as far as education could be free in an ordinary public school. 1) Life expectancy / retirement On the other hand, the same questions have been asked to the class teacher which is actually a worker for the French state that has a monthly salary of about 2 700 �. These results could help us compare and analyse social class differences to indentify more easily some issues that could happen in the future in French society; even though the results obtained with the teacher would be more personal as on the other side we have a more general idea based on 27 students. ...read more.

Of course all the age limits should be fixed and decided precisely by the concerned people. The state would therefore ameliorate, (from my point of view), its reputation, as they should be seen like welcoming new generations and valorising change. The fact that there will be more young people employed could also accelerate economy and make some place to innovations, to the government's profit that could use this money to pay the retirements more easily. Also, I think rich people that are considered, (by specialists), having enough money for the rest of their lives should not be paid their retirement, which seems quite logical for me. Moreover, people from old generations will be paid by companies to transmit their experience to young employees so that they don't feel somehow useless, which could cause psychological problems. I believe these laws could initially create better understanding between generations, and also between the government and the population, which could lead to a more prosperous and homogenous society in the future. 2) Immigration / integration One of the main issue in French society today that is somehow so much preoccupying politics about the future is without a doubt immigration. ...read more.

So by looking at these numbers we can observe that it is quite hard to be well integrated in society when you don't earn enough money; so for migrants it makes it even harder. If the integration problem isn't going to be solved, tensions and hatred will build up within the population leading to a chaotic society. As mentioned before, this subject is part of numerous political and social debates and conversation, but it seems like no important reaction and solution has been brought yet. Instead of rejecting immigrants, would rather welcome them and create a law for them to be integrated. The best I could come up with was that for every unemployed immigrant, he would be given a job for the French state from the government. Instead of being paid he would be given a home and a health insurance. Hence, the unemployment rate will decrease, and immigrants would be more respectful and thankful to the government which would calm down criminality and violence. In general, what brings out conflict in society is difference. Diverse ideas, diverse cultures, diverse political views, diverse sexual orientations, all of this can create conflict but its up to the government to take out profit of these features and thinking how all these differences can help the country instead of damaging society. ...read more.