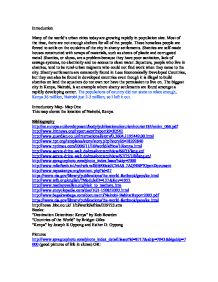 Introduction Many of the world's urban cities today are growing rapidly in population size. Most of the time, there are not enough shelters for all of the people. These homeless people are forced to settle on the outskirts of the city in shanty settlements. Shanties are self-made houses constructed with scraps of materials, such as sheets of plastic and corrugated metal. Shanties, or slums, are a problem because they have poor sanitation, lack of sewage systems, no electricity and no access to clean water. Squatters, people who live in shanties, tend to be rural-urban migrants who could not find work when they came to the city. Shanty settlements are commonly found in Less Economically Developed Countries, but they can also be found in developed countries even though it is illegal to build shanties on land the squatters do not own nor have the permission to live on. The biggest city in Kenya, Nairobi, is an example where shanty settlements are found amongst a rapidly developing center. The populations of country did not seem to relate enough, Kenya 36 million, Nairobi just 2-3 million, so I left it out. Introductory Map- Map One This map shows the location of Nairobi, Kenya. Bibliography http://ec.europa.eu/development/body/publications/courier/courier185/en/en_066.pdf http://www.irinnews.org/report.aspx?reportid=30542 http://www.guardian.co.uk/international/story/0,3604,1195449,00.html http://www.npr.org/templates/story/story.php?storyId=18292840 http://www.nytimes.com/2006/11/10/world/africa/10kenya.html http://www.aerzte-dritte-welt.de/cms/content/view/66/33/lang,en/ http://www.aerzte-dritte-welt.de/cms/content/view/67/75/1/0/lang,en/ http://www.spraguephoto.com/photo_index.lasso?skip=7000 http://www.reliefweb.int/rw/rwb.nsf/db900sid/CMAS-7AQNBF?OpenDocument http://www.mysakenya.org/content.php?id=27 https://www.cia.gov/library/publications/the-world-factbook/geos/ke.html http://www.wfp.org/english/?ModuleID=137&Key=1952 http://www.matharevalley.org/visit_to_mathare.htm http://www.encyclopedia.com/doc/1G1-150852093.html http://www.begakwabega.com/documenti/Nairobi-HabitatReport2003.pdf https://www.cia.gov/library/publications/the-world-factbook/geos/ke.html http://news .bbc.co.uk/ 1/hi/world/africa/229723.stm Books: "Destination Detectives: Kenya" by Rob Bowden "Countries of the World" by Bridget Giles "Kenya" by Joseph R Oppong and Esther D. Oppong Pictures http://www.spraguephoto.com/photo_index_detail.lasso?id=8717&skip=7043&bigskip=7000 (good pictures of life in slums) OR: http://www.spraguephoto.com/photo_index.lasso?skip=7000 (photo index, see labels to pics, same site) MAP 2: NAIROBI SHANTIES! http://www.reliefweb.int/rw/rwb.nsf/db900sid/CMAS-7AQNBF?OpenDocument MAP THREE:Mathare: http://www.reliefweb.int/rw/rwb.nsf/db900sid/LRAY-7AMMAS?OpenDocument >>http://www.reliefweb.int/rw/fullMaps_Af.nsf/luFullMap/314EBA7B71841C14852573C9005AE130/$File/unep_REF_ken080105_a.pdf?OpenElement (MAP) Self-help schemes http://www.lboro.ac.uk/well/resources/Publications/Country%20Notes/CN16.1.htm Causes http://www.ucl.ac.uk/dpu-projects/Global_Report/cities/nairobi.htm Footnotes: 1) http://www.reliefweb.int/rw/rwb.nsf/db900sid/CMAS-7AQNBF?OpenDocument (MAP TWO) 2) http://www.citypopulation.de/Kenya.html 3) http://www.oikoumene.org/es/activities/la-reda/recursos-y-enlaces/reda-galeria-de-fotos/water-and-sanitation-at-the-kibera-slum-nairobi-kenya.html (picture) 4) http://www.travelblog.org/Photos/201131.html (picture) 5) http://www.aerzte-dritte-welt.de/cms/content/view/66/33/lang,en/ (picture) 6) http://www.spraguephoto.com/photo_index_detail.lasso?id=8719&skip=7042&bigskip=7000 7)http://picasaweb.google.com/mcgibbaa/EastAfrica2007/photo#5094227137373002402 (picture) 8) http://www.aerzte-dritte-welt.de/cms/content/view/67/75/1/4/lang,en/(picture) 9) http://peopleandplanet.net/doc.php?id=2217 10) http://www.aerzte-dritte-welt.de/cms/content/view/68/76/1/4/lang,en/ (picture) 11) http://www.spraguephoto.com/imageresponse.lasso?id=13172&-token.caption=Small%20shops%20of%20Mukuru,%20Nairobi,%20Kenya. (picture) 12) https://www.cia.gov/library/publications/the-world-factbook/geos/ke.html#People 13) http://www.aerzte-dritte-welt.de/cms/content/view/68/76/1/5/lang,en/ (picture) 14)http://www.spraguephoto.com/photo_index_detail.lasso?id=8723&skip=7037&bigskip=7000 (picture) ...read more.

poor country( education could occur for the people with housing in the cities where there is easier access, and these educated people will help bring industry and free up jobs for the unskilled, allowing an opportunity for the unskilled workers to have steady jobs and to contribute to the economy, and would also bring wealth into the settlements improving the living conditions, but this can only happen with money to support proper education in the city, and this is the commodity that Kenya and Nairobi lacks the most) . So this policy results in a continuous strain on the economy, with no real solution in sight, giving very basic amenities to the residents of these squatter settlements. The international help to this problem in Kenya has helped the situation. When the World Bank projects started in the 1970s, in the suburb of Dandora, it led to declining rents in the city and greater availability of sanitation and potable water than in other African cities. These international projects were not free and were paid for by the residents and people of Kenya. When, in the 1980s, the wealthy residents stopped paying charges and taxes, the fees were than directed to the poor beneficiaries of the project. These people rioted against these high taxes. Situations similar to this occurring around Nairobi and with the cumulative arrears in loan repayments from the tenants of the municipal housing projects were below 60 percent of the amount due that year. In 1996 a World Bank evaluation of its Nairobi projects showed that the Nairobi City Council had failed on its loan recovery efforts and the management of property. It was now unable to promote home ownership, failing to reduce the proliferation of informal settlements. This resulted in a loss of structure to continue the internationally sponsored slum upgrading projects. International aid now occurs in isolated cases around Nairobi, providing basic Amenities to the cost of the international organization, upgrading the settlements. ...read more.

More importantly, some migrants can open up small stores when they live in slums and make a small amount of money that is just enough for survival. See Figure 5 for photos of shanty stores. Despite these horrific conditions, people are still flooding into Nairobi, partly because there is a lack of open communication that portrays the realistic realities and future for rural-urban migrants in Nairobi, and also because of what is happening in the rural areas that push people to want to try for a better life in the city. One reason is that Kenya, with its high fertlilty and population growth rate experiences large familiesw in rural areas, which results in more children to be part of a will, yet a farmer only has a limited amount of land, and must than give the land to the eldest, and sometimes eldest and econd eldest son to own, with the rest of the sons not getting any land, they will have to go to the city to get a job to support themselves as they cannot get a job in the village. A more recent factor is the current civil strife in Kenya, with riots and protests. These riots and protest stems from racial hatred and spreads all over the country, destroying land and farms, which results in a loss of farm land, the farmer must still get money to support his family, so he moves to the city to work and to send the money back home for support, this occurs in different variations with drought and natural disasters destroying the farm and the farmers only source of income. This racism described earlier is not forgotten in the city or with people in the exact same position as oneself. This is reflected in the way that squatter settlements are consisitant of the same racial groups separated from one another, keeping to their own community. This helps make it harder for these people to unite and confront the government for better housing and to make them to stop evicting them, but also helps to create violence in ...read more.